It’s been a while since I last wrote. Primarily, this was because there wasn’t much to write about apart from the usual routine. However, with the summer finally here and a collection of experiences to boot, it was the perfect opportunity to write a new post.

For most second year students, this summer is used for starting their internships and year long placements. For me though, the summer was the perfect opportunity to get started on my third year project. Getting this head start was imperative since I had a lot of ground to cover, in graphene, physics, chemistry and nanotechnology.

The third year project is a piece of extensive academic work that all undergraduates must submit in the School of Computer Science in their final year. One can propose their own topic or choose a topic from those that have been proposed by the faculty members. The topics proposed by the faculty members span a huge number of sub-fields of computer science and some offer the opportunity to work on cutting edge technology, like the SpiNNaker project.

My project, on the other hand, isn’t heavily focussed on pushing the boundaries of a CS field, which some of the other projects in the past have done. What I intend to do is build a sensor which is about as wide as one’s fingertip and use that to monitor eye blinking. Now one might wonder what can something as mundane as eye blinking tell us. Surprisingly, a lot. Primarily, it can tell you if you have developed a neurodegenerative disease and that is what I am interested in finding out. To do that, I am going to use a single layer of graphene, which is about as tall as 2D materials are and about as wide as the tip of one’s finger, stick it onto some medical tape and pass an electrical current through it. Given the nifty properties of this wonderful material, it should detect a blink, when mounted on a small muscle close to one’s eyebrow. This blink would be represented as a change in resistance, which hopefully, should be read by a small Arduino board on one’s spectacles. That’s the idea, at least. And that’s how my summer started, straight out of the exam room and into the research lab. The moment to relax a little came on the weekend, at a hackathon in Amsterdam. 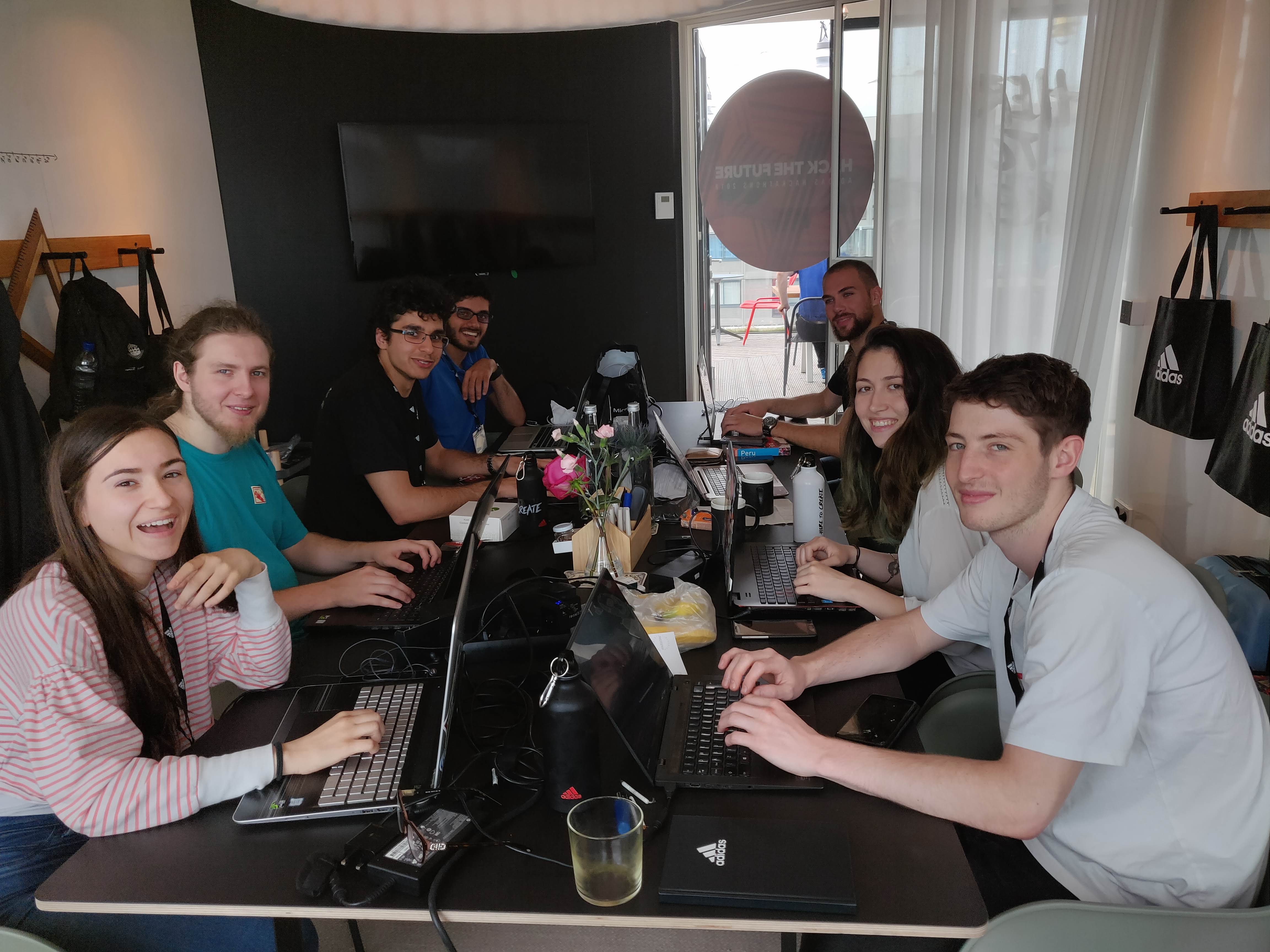 The Amsterdam hackathon was organised by adidas as part of a series of hackathons over Europe and 8 of us from Manchester attended, partly thanks to the generous support of the Student Activities Fund. The objective of the hackathon was to help ‘Personalise the next generation shopping experience’, which I think was a very vague topic! The hackathon itself was very well organised, it was at an excellent roof top venue with lovely food. All in all, the hackers were very well taken care of, as they should be, at a corporate hackathon. The 8 of us from Manchester formed two teams, my team worked on creating a facial recognition based system that provides in house sales assistants with personalised information about the clients in store, whereas the other team built a machine learning driven service that finds you similar products as the one you see on social networks. Though we didn’t win, we learnt a great deal about React and Vue.js. In addition to that, we were also able to take some time off hacking and explore the city on bikes.

On returning from Amsterdam, I was back in the lab, refreshed and raring to go. The entire experience in the lab deserves its own post, so I shall speak more about that at the end of the summer. Before I end, I am going to talk about the other highlight of the summer, moving to a self-catered hall.

In my last post, I had mentioned that I had moved into a heritage hall called Ashburne. Since Ashburne is only open for term time, I had to pack up and move into one of the summer accommodations that the university offers. Given a choice between the legendary Oak House and Whitworth Park, I ended up choosing Whitworth Park. Whitworth Park has quite a few things going for it. It is conveniently situated very close to the university, is really close to the famous concert venue at Manchester Academy, has a pub on site and the Turing Tap right outside. Moreover, the hall has a well equipped gym and the kitchen is an absolute dream to cook in. In essence, you can cook to your delight in the huge kitchen, after purchasing some really good ingredients from the supermarket outside your front door, grab a pint and not feel guilty about piling on the calories since the gym awaits you to sweat it out.

That wraps up a quick summary of my summer so far. I’ll talk more about my 3rd year project and the experience of working in a nanotechnology lab in the next post. Until then!

I am from Mumbai, India and am studying Artificial Intelligence here. My interests include chess, data science, entrepreneurship and natural language processing. Amongst non-academic things, I love hiking and a good game of football. I am also a Manchester United supporter and they were one of the reasons I chose to come and study here.

I am from Mumbai, India and am studying Artificial Intelligence here.