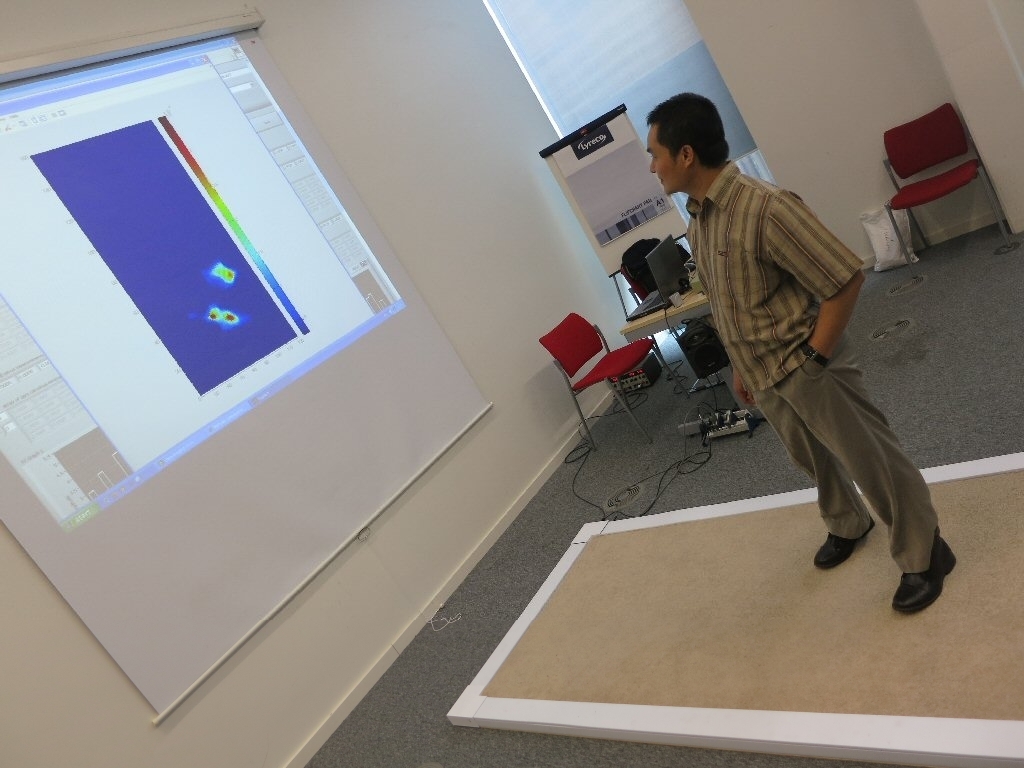 iMagiMat: A mat that measures footsteps, gait, mobility and exercise

A ‘magic carpet’ which can immediately detect when someone has fallen and can help to predict mobility problems has been demonstrated by University of Manchester scientists.

Plastic optical fibres, laid on the underlay of a carpet, can bend when anyone treads on it and map, in real-time, their walking patterns.

Tiny electronics at the edges act as sensors and relay signals to a computer. These signals can then be analysed to show the image of the footprint and identify gradual changes in walking behaviour or a sudden incident such as a fall or trip. They can also show a steady deterioration or change in walking habits, possibly predicting a dramatic episode such as a fall.

As many as 30%-40% of community dwelling older people fall each year. This is the most serious and frequent accident in the home and accounts for 50% of hospital admissions in the over 65 age group.

Presenting their research to the Photon 12 conference, the scientists believe the technology could be used to fit smart carpets in care homes or hospital wards, as well as being fitted in people’s homes if necessary. Physiotherapists could also use the carpet to map changes and improvements in a person’s gait.

The imaging technology is so versatile it could even be developed to detect the presence of chemical spillages or fire as an early-warning system.

The interdisciplinary team, from three academic Schools and the Photon Science Institute at The University of Manchester, used a novel tomographic technique similar to hospital scanners.

It maps 2D images by using light propagating under the surface of the smart carpet.

The researchers believe the magic carpet could be vital not only for helping people in the immediate aftermath of a fall, but also in identifying subtle changes in people’s walking habits which might not be spotted by a family member or carer.

One of the team, Dr Patricia Scully from The University of Manchester’s School of Chemical Engineering and Analytical Science, said: “The carpet can gather a wide range of information about a person’s condition; from biomechanical to chemical sensing of body fluids, enabling holistic sensing to provide an environment that detects and responds to changes in patient condition.

“The carpet can be retrofitted at low cost, to allow living space to adapt as the occupiers’ needs evolve – particularly relevant with an aging population and for those with long term disabilities – and incorporated non-intrusively into any living space or furniture surface such as a mattress or wall that a patient interacts with.”

Professor Krikor Ozanyan from the School of Electrical and Electronic Engineering added: “We pioneered this new kind of tomography here at The University of Manchester in 2005. Now we are delighted to show how achievements in maths, science and engineering can bring together this exciting new application in healthcare.”

Dr Christine Brown Wilson from the School of Nursing Midwifery and Social Work said: “This project demonstrates how engineers, scientists and healthcare professionals, can work together to develop new and innovative health care technologies that make a real difference in practice.

Professor Chris Todd said: “Falls are a really important problem for our ageing society. More than a third of older people fall each year, and in nursing and residential homes it is much more common than that.

“Older people will benefit from exercises to improve balance and muscle strength in the legs. So being able to identify changes in people’s walking patterns and gait in the natural environment, such as in a corridor in a nursing home, could really help us identity problems earlier on.

“This is really exciting work at the forefront of research using technologies to prevent falls and represents an unique collaboration between scientists from different backgrounds working together to identity a smart solution to an important problem for our country and indeed all over the world.”