Xiaoyu’s current research interests centre on the surface chemistry of ThO2 and PuO2, especially with small molecules such as water, NOx, HCl, etc. This work forms part of the Nuclear Materials theme of the TRANSCEND consortium. She was awarded her PhD from the Department of Chemistry at UCL in 2015. Prior to joining Manchester University, she focused on low-dimensional materials for electronic devices, for photo-/electron- catalysts through both theoretical and experimental approaches. She has been awarded the UCL Researcher-led Initiative award and the UK-China Research for Excellence award. She served as the co-opted committee member of the British Carbon Group and as a guest editor of Nanoscale Research Letters. She enthusiastically promotes Women@STEM. 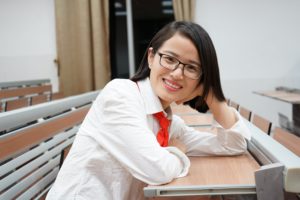 For more than 50 years, nuclear power has been a key part of the UK’s energy mix. Unlike many countries, the UK has reprocessed its spent nuclear fuel, recovering still-viable components which can be reused in new fuel. One product of this recycling is plutonium, and the UK has about half of the World’s civil inventory of this element, stored safely in an interim facility at Sellafield as plutonium dioxide powder. The long-term fate of this material is yet to be decided, the most likely options being re-use in mixed oxide nuclear fuel or burial deep underground in a geological disposal facility. Although it has been estimated that the UK’s plutonium inventory could generate c. £100 Bn of electricity, we do not currently have the capability to manufacture mixed oxide fuel on a commercial scale. And, while much work is being carried out to prepare for a geological disposal facility, the UK has not yet identified a site for its location. Hence, we must continue to store our plutonium above ground for several decades. Together with colleagues from Manchester, Imperial College London, the National Nuclear Laboratory and Sellafield Limited, Jia-Li is working to understand more about the aging of plutonium dioxide, to aid future decisions concerning its ongoing safe storage. 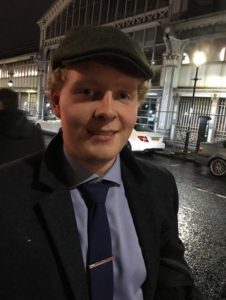 In 2005 it was shown that aqueous actinyls in the presence of peroxide and alkali metal ions are able to spontaneously form stable and water soluble cage structures. These cages are thought to occur in places where actinides are in direct contact with alkali metal containing water, such as the contaminated sea water from the Fukushima power plant. Additionally these cages have been linked to enhanced rates of fuel rod corrosion in aqueous environments. As such, understanding these molecules could prove useful in nuclear clean up and decommissioning.

Nic’s project will involve studying the geometric and electronic properties of these cages, beginning by looking at uranyl peroxide dimers before moving onto progressively larger and more complicated cage clusters. 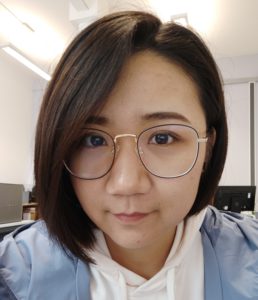 The search for molecules with ever increasing coordination number (CN) remains a very active area of research. In 2016, the record stood at 16 (in systems characterised both experimentally and computationally) but very recent computational predictions have raised the bar first to 17, and then 18, in complexes of helium with early actinide (An) cations. Furthermore, it has previously been shown that the electronic ground state of early actinide triatomic molecules can be altered by complexation with Noble gas (Ng) atoms.

Therefore, Lin aims to employ a wide range of computational methods (including those based on DFT, coupled cluster theory, and PIMD) to search for stable An-Ng complexes with high CNs. Her work on this topic has been published. Lin has now moved on to study the migration of inert gas atoms through uranium dioxide and uranium nitride. 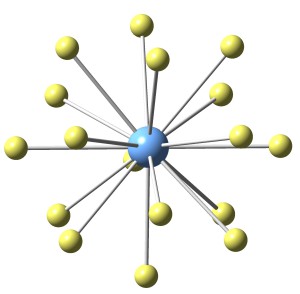 Emma’s research focuses on the integration of biocatalysis and metal-mediated radical cyclizations for diversity oriented synthesis. Synthetic chemists have struggled to generate molecular complexity from simple starting materials whilst still achieving a precise control of 3D shape. Biocatalysis — the use of enzymes to catalyse chemical transformations — is a rapidly developing field for the synthesis of complex, biologically- relevant structures. Biocatalysis has made it possible to access complex architectures with exquisite selectivity that can be difficult (or impossible) to achieve using traditional chemical methods. The benign nature of enzymes makes them suitable alternatives to traditional chemocatalysis; enzymes are biodegradable, non-toxic, often reusable and are derived from renewable resources. In addition, reactions are mostly carried out in aqueous solution and at moderate temperatures, making them more favourable than conventional chemically-mediated processes. Recent advances in the field — thanks to recent Chemistry nobel prize winner, Frances Arnold — such as directed evolution, enables enzymes to be genetically modified in order to tailor their properties. So far this has allowed operation of the enzymes in new reaction conditions, optimisation of their catalytic activity towards new substrates and the generation of new biocatalysts which catalyse chemical transformations unknown to nature. The future of molecular manufacture will see the integration of biocatalytic and chemocatalytic processes become more prominent. Emma’s current studies look at combining an experimental and computational approach in order to integrate biocatalytic processes with SmI2-mediated radical cyclisations.

The Enhanced Actinide Removal Plant (EARP) at Sellafield has been the UK’s most crucial radioactive effluent treatment plant since its operation began in 1994. The EARP removes actinides and other fission products by association with ferrous mineral phases during a base-induced precipitation process. The same process was also used to aid the clean-up operations after the 2011 Fukushima Daiichi disaster. Unfortunately, the mechanism by which the actinides associate with the iron-bearing minerals is unknown. It has been observed that during the process Pu(IV) may bind to a Keggin type Fe(III) nanocluster with further evidence that the Keggin unit is a prenucleation cluster during ferrihydrite formation.  Ryan will use molecular quantum chemical techniques based on open-shell Density Functional Theory to investigate the bonding interactions and redox chemistry between actinides and this Keggin cluster. Starting with Pu(IV), and exploring other actinides found at the EARP, Ryan aims to provide a better understanding of the processes underpinning nuclear waste clean-up to inform future efforts. 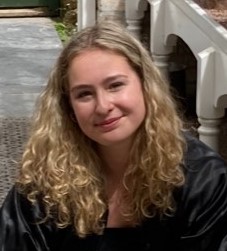 The long-term storage of high level spent nuclear fuel is a problem in the UK and worldwide, and one potential solution is to design and employ geological disposal facilities (GDFs). In these facilities it is crucial that the uranium and other actinide species are unable to migrate into the geosphere. To design GDFs, the interactions between actinide species and minerals surfaces at an atomic scale need to be understood and a comprehensive model developed. Iron (II) minerals are being researched specifically due to their abundance and ability to react with uranium species. Corinne’s research will be studying the interaction, chemical bonding and REDOX transformations of aqueous uranium species with iron minerals. This research will use hybrid DFT within the Periodic Electrostatic Embedded Cluster Method (PEECM) with accompanying experimental studies with the Natrajan group here in Manchester.