The increasing shortage of potable water in many parts of the world is leading the development of various approaches to water purification, with desalination of seawater the prime target. The most common approach to desalination is reverse osmosis (RO), being used in 65% of currently installed plants, but its high costs due to the use of membranes, leading to high-energy requirements, is pushing the desalination industry to find other solutions. An alternative to the high-energy requirements of RO is a method called Capacitive Deionization (CDI). In this process, two porous electrodes are arranged parallel to one to the other, letting brackish water flow between them. When a voltage is applied, the ions from the feed water migrate to the surface of the electrodes and are adsorbed capacitively, reducing the overall concentration of salts in the water stream. When the voltage is removed or reversed, the ions desorb from the surface of the electrodes, resulting in a by-product of this process, brine. One of the greatest advantages of this system is that the applied energy can be recovered during the discharge step, just like an electrochemical capacitor, that is used to store energy by means of a pair of electrodes.

In our group we’re interested in the following areas of CDI: 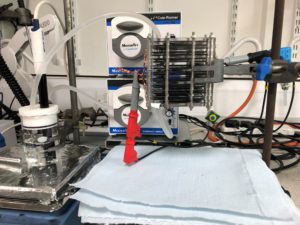