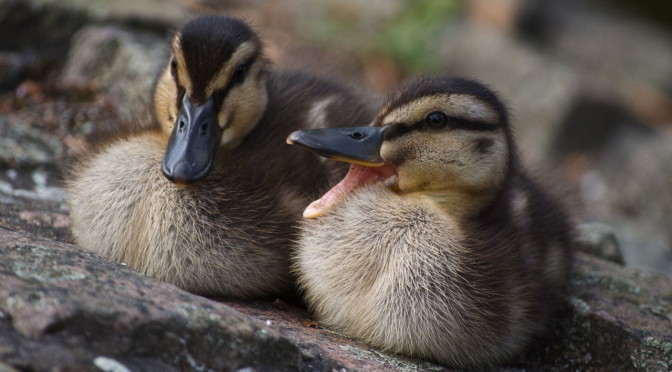 In the past few years, we’ve had some new residents camping out at the School of Computer Science building every spring and summer. A pair of ducks had settled in the lovely little garden in our quadrangle (or, the “quad”) and decided to start a little family there. While the school staff enjoyed the presence of their feathery new neighbours, they were a little concerned about their health, due to the lack of sufficient food and water in the quadrangle, and so the duck family was soon moved to a new pond outside the city.

That didn’t stop them (or some other, strikingly similar looking pair of mallards) to return to the quadrangle this year. You can probably imagine how excited we were when we discovered that the duck family had grown by 5 little ducklings, who were following their duck mum’s every step. For a few days, they were the main attraction of the Kilburn building!

But one sunny Tuesday afternoon, the “duck incident” happened: One of the ducklings had somehow managed to fall into a gap between the seat and the base of a large stone bench. We could hear it tweeting from inside and rustling leaves, walking up and down while trying to find a way out. But the gap was now to high up for it to reach, and so the duckling was trapped inside the bench. Soon, a group of people had gathered in the quadrangle, lifting up floor tiles and sticking their hands under the bench to help free the lost duck. But it seemed impossible – the seat of the bench was a huge, heavy concrete slab, which would only move little. But we kept trying to find a way inside regardless, desperate to rescue the duckling and return it to its mum, who was quacking from across the garden.

Finally, with the help of several academic and admin staff, we lifted the giant concrete slab off the bench. And there it was, the lost duckling, peering at us from the darkness of the dusty bench. After building a little ladder for it to get out of the bench, we left the quadrangle, allowing the duck to get out at its own pace.

When I checked back a few hours later, I could spot the duck family with all 5 ducklings, happily reunited, waddling around the green. But the time had come for them to move on: Just a day after this dramatic rescue the ducks were picked up and taken to a pond in Cheshire, where they now reside, far away from computer scientists and dangerous benches.

I am a PhD graduate from the School of Computer Science information management group (IMG), supervised by Bijan Parsia and Uli Sattler. I graduated from my undergraduate course in Media Informatics in Leipzig, Germany in 2008, and continued my studies with an MSc in Advanced Computer Science at Manchester University.

I am a PhD graduate from the information management group (IMG), supervised by Bijan Parsia and Uli Sattler.