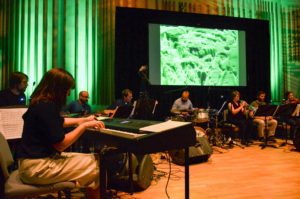 Graphene Week is an annual gathering for international leading experts on graphene and two-dimensional materials, creating Europe’s most influential conference. Organised by the Graphene Flagship, the conference provides a platform for the graphene academic community to present the latest scientific results, outstanding networking activities, and innovative exhibition opportunities.

Graphene Suite which debuted at the Martin Harris Centre is a beautiful, wondrous and original piece of music featuring piano, synthesisers, guitars, strings, trumpet and oboe. With six movements, each movement reflects in some way Sara’s time at the National Graphene Institute with Prof Cinzia Casiraghi, and explores the commonalities between the two creative processes: composition and scientific discovery.

Mixing different musical styles and nuances, the piece also pays tribute to the pioneering female composers and scientists of the past.

Manchester based Sara has a successful career as a musician including work with The Earlies, Tokolosh, Jim Noir, King Creosote and Jesca Hoop. Her latest solo album The Joy of Waiting, released by From Railings Recordings, was applauded by the Independent on Sunday and praised by the music press for its ‘intricate detail’, ‘precision, craft and charm’.

Brighter Sound produced the Graphene Commission at the National Graphene Institute (The University of Manchester) as part of the Wall of Sounds Programme, a partnership with Band on the Wall. The project is supported by the National Lottery through Arts Council England, Manchester City Council and the Granada Foundation.