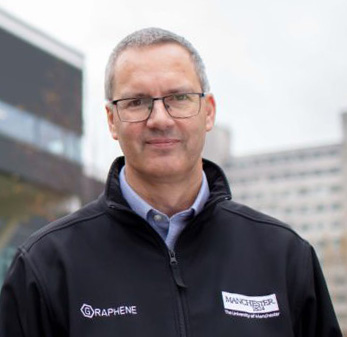 James Baker, CEO of Graphene@Manchester, reflects on how the UK government’s commitment to spending on research and innovation, particularly when it comes to advanced materials, could support the economy to get back on its feet in the wake of COVID-19.

In the early months of 2020, Rishi Sunak, the Chancellor of the Exchequer, emerged from relative obscurity to assume his role as a national leader, pledging billions of pounds in taxpayers’ money to help save British businesses and their employees otherwise facing ruin in the COVID-19 crisis.

This bold move by UK government to protect businesses was, of course, a welcome lifeline but as we look ahead – beyond the initial economic shock – we need to rebuild and somehow deliver growth and prosperity once more; and quickly.

Just before the pandemic hit the UK in March, you may recall the newly appointed Chancellor delivering the 2020 Spring budget to a packed House of Commons. Within his debut budget, Sunak included a spending announcement for a new UK advanced research agency that could revolutionise the UK’s approach to innovation. That commitment has now been confirmed in the Government’s UK Research and Development Roadmap, which pledges £800m towards “a unique and independent funding body for advanced research, modelled on the US’ Advanced Research Projects Agency (ARPA).”

ARPA and its defence-focused successor DARPA have been a hugely successful innovation catalyst in the US and are credited with developing breakthroughs in robotics, for creating an early version of the internet, as well as delivering GPS and stealth technologies. It has achieved this through an attitude to risk that accepts “failure is normal”.

I believe this philosophy to innovation has real merit and I would like to see this more widely adopted by UK government in relation to research. In fact, I would recommend that the UK government looks at the model of “learn fast, fail fast” that we have pioneered here in Manchester, primarily being applied to our commercialisation work involving graphene and advanced materials.

So what is our Manchester model of innovation? Well, I have brought the “don’t be afraid to fail” philosophy to the Graphene Engineering Innovation Centre (GEIC) – the £60m graphene commercialisation facility based at The University of Manchester.

I have written about this in previous Policy@Manchester blog posts but essentially, while designing the GEIC’s business operating model, we took inspiration from a number of sources – including DARPA, the UK’s Catapults programme and the German Fraunhofer network – to create a unique but effective innovation catalyst.

The GEIC is now working to commercialise graphene and other disruptive 2D materials – and we are looking to accelerate lab-to-market applications in advanced materials.

I believe our approach in Manchester is setting us apart. Up until now, the UK innovation strategy has tried to pick potential winners and then construct large and heavily funded “too big to fail” research projects to deliver on expectation.

The alternative is to run a series of relatively low-cost pilots in places like the GEIC. If a project fails, then learn from your mistakes. Like a game of snakes and ladders, you can go back up the Technology Readiness Level (TRLs) in your ‘science supply chain’ to locate and fix any glitches. This approach has helped the US drive incredible advances in post-war innovation and bring new, game-changing technologies to the world.

The crucial thing to remember is that this is a private-public sector approach, a symbiotic relationship that underpins a successful entrepreneurial nation and with continued support from government through initiatives like those included in the new roadmap.

‘Devolution of innovation’: the UK version of DARPA

In the early 1960s, DARPA’s civilian predecessor ARPA gave money to some of America’s own world-leading universities, like the Massachusetts Institute of Technology (MIT), Berkeley (University of California) and Stanford. I would suggest the UK government does something similar and cuts the bureaucracy and red tape across the UK’s higher education sector to empower academics to embark on more visionary work.

Reported in The Economist magazine earlier this year,  my colleague Richard Jones, Chair in Materials Physics and Innovation Policy at Manchester, says this more liberal innovation model could work hand-in-glove with the government’s own ‘levelling up’ agenda, which aims to support deprived parts of the country by building research capacity in places away from the prosperous South-East.

I believe the GEIC at The University of Manchester is an exemplar of that devolution of innovation. We are supporting our own graphene-based ecosystem – which we call Graphene City – and I see no reason why other Northern or Midlands city-regions cannot support their own unique innovation theme led by a local research university. Together, as a like-minded network with the support of the UK version of DARPA, we can create the conditions for science to lead the way to economic recovery.