Aranza: why I fell in love with graphene and Manchester

Chemical engineer Aranza Carmona Orbezo hails from Mexico City, so she knows about the importance of reliable water supply for a large population. For the last four years, she’s been working on her PhD at Manchester’s Department of Chemistry, using graphene in capacitor systems to desalinate sea water for human consumption. She tells us about her research, the challenges that 2020 has posed and her vision for future technology…

So what brought you from Mexico to Manchester?

I did my undergrad and Master’s in chemical engineering and my Master’s was focused a little bit on nanomaterials. So the first time that I heard about graphene, I fell in love with it.

I knew from the moment that I read that amazing paper [Geim/Novoselov et al on the isolation of graphene] that I wanted to work on something related to graphene. And of course, there’s no better place to work with graphene than in Manchester. 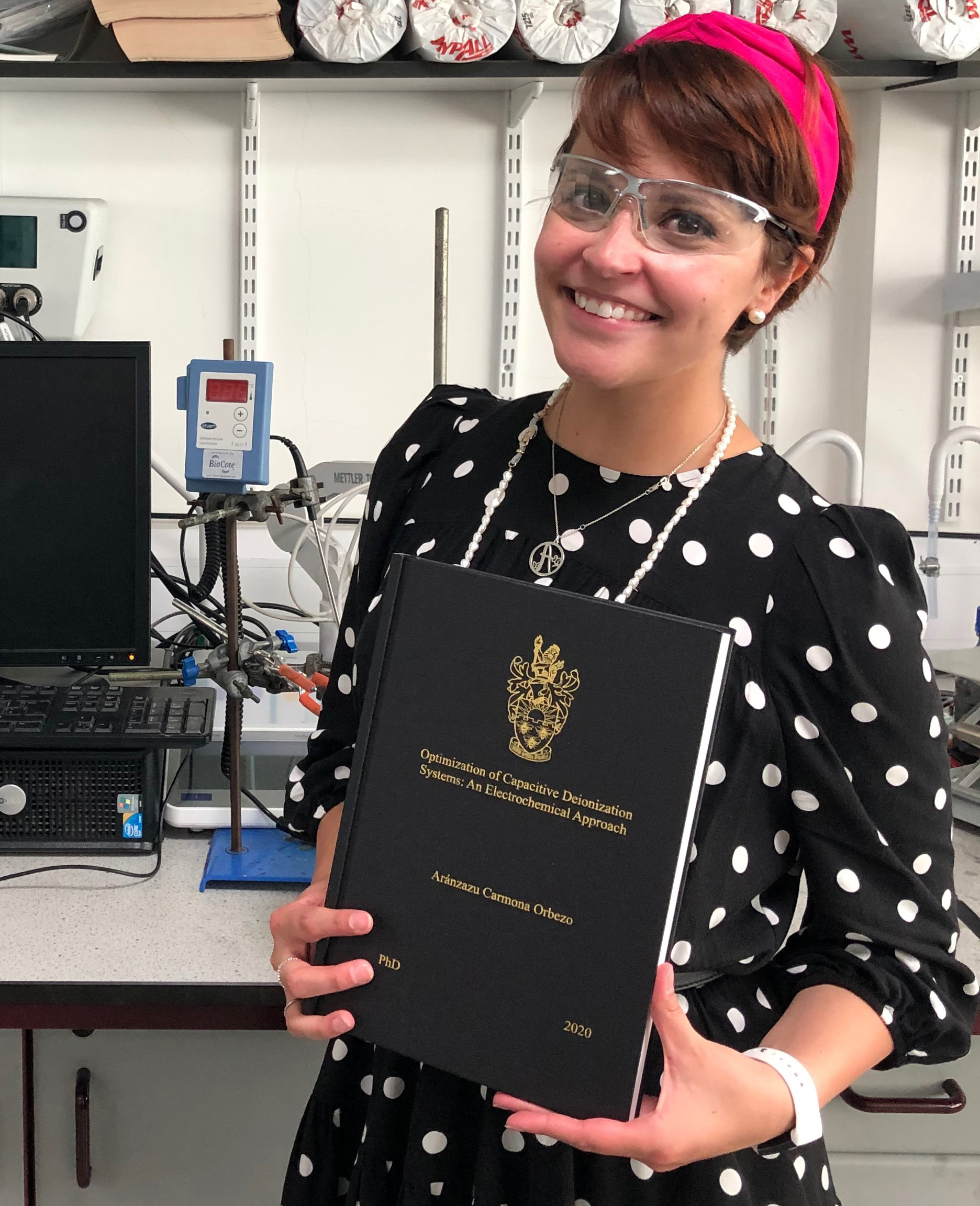 I started to do some research into the things that I could do and I found Professor Robert Dryfe on the Graphene@Manchester website and that he specialised in working with energy storage and the electrochemical performance of graphene.

That’s a topic that I’ve always been very passionate about: the idea that we can used these very technical electrochemistry concepts and use them in a final application, because the world that we’re living in really needs these types of things.

I got in touch with Prof Dryfe and then during Graphene Week, which took place in Manchester in 2015, I had the amazing opportunity to visit and have a meeting with him, and fall even more in love with the University.

Tell us a bit about your research…

Water supply and scarcity is going to be a huge problem that faces humanity in the next 10 to 15 years. Sometimes for people in Britain, it’s not that obvious – they say “c’mon, water scarcity? It rains here all the time” – but London, for example, is one of the 12 cities across the world that are going to have big water scarcity issues in that timeframe.

Mexico City has had water supply problems for the last 20 years, and it’s getting worse by the minute, so it’s really important to find solutions now.

So my main research is using energy storage systems – capacitors and supercapacitors – to desalinate sea water and make it available for human consumption.

We try to understand the fundamentals – to really understand how it works – and then incorporate graphene or other 2D materials in the system to improve its performance. We know that graphene has great electrical conductivity, so it can be used within this system.

The technical name for what I’m working on is ‘capacitive deionisation’ and though it isn’t being reproduced at scale yet, it can definitely be scaled up. The idea is to find these better materials and better technologies to be able to compete with a process like reverse osmosis, which is the main process used currently to desalinate water.

One of our key advantages is that deionisation brings a lower overall cost for desalination because energy usage is reduced. As the system uses capacitors, you can recover some of that energy.

How has the Covid crisis affected your work and your life in Manchester?

It was difficult for my research because [at the time of lockdown] I needed only three more weeks to finish my entire experimental work for my PhD. It was so frustrating because I was so close but then so far!

In the end it was 15 weeks until I was able to get back in the lab. But on the positive side it gave me a really good opportunity to focus on thesis writing – just me and my computer – and it really helped me with the final document.

I decided to stay in Manchester rather than go home to Mexico as things were a little bit more complicated over there, and I had the chance to explore the city in a really quiet state – in the hour that we were allowed to go out and walk – and just to go and breathe and try to relax and understand the crazy situation.

And it also gave me time for a sense of closure on my PhD – I can’t quite believe that I’m finishing my PhD I the middle of a pandemic – but it gave me a chance reflect on all of the things that I have learned during these past four years.

In a more ideal world, how do you like to spend your spare time?

I also like doing scientific outreach – going to events to talk about research and show young people how they can get involved with science. I’ve been involved previously in [pub-based outreach initiative] Pint of Science as media and promotions officer and I’m also a spokesperson for women in STEM.

What do you see as the future of graphene research in your area?

In terms of the application for desalination, I think that’s going to be more medium to long-term because there are a lot of things that we still need to understand. Graphene works in really interesting ways, some of which we weren’t expecting – in the systems that we have, and there are questions that still need to be answered.

Fortunately there are a lot of groups, here in Manchester and around the world, working on it and trying to find solutions, so hopefully we will be able to see graphene being used in these capacitive desalination systems before too long.

In terms of water desalination in general – with membranes, for example – since I arrived in 2016, there have already been some great breakthroughs with graphene in reverse osmosis systems, so I think we will see them, at least at the scale for home use, quite soon.

Even wider, one of the things I love about graphene is that there’s no limit for its applications. The only limit is our own imaginations. In the long term, graphene will be that material that will change the world and all of the investment that we’ve seen over the last few years will be paid back many, many times. The sky’s the limit!

And what about your own future?

I would love to continue my career in academia or in industry, as long as I am involved in science and working in breakthroughs in science that allow me to deliver applications for a final user experience.

So right now I’m thinking about whether to do a post-doc or shift a little bit towards trying to get seed money for a start-up. Thinking further forward, I’d love to still be working in applied research and work with governments and other organisations to expand what we’re doing in science to solve the big problems facing our society – so-called ‘scientific diplomacy’. That’s my long-term goal for the future.

Want to know more? Watch Professor Robert Dryfe explain about our research into energy storage at The University of Manchester.