How the ‘science of sandcastles’ proves Kelvin right, 150 years on

Capillary condensation, a textbook phenomenon, is omnipresent around us. For example, children playing on the beach rely on this microscopic process to hold their sandcastles together. Common physical effects such as friction and adhesion are governed by it.

But despite its importance to our physical world, to explain capillary condensation at microscopic scale, scientists have so far had to rely on a rough, macroscopic equation first proposed by the great Victorian physicist Lord Kelvin 150 years ago.

Water vapor from ambient air will spontaneously condense inside porous materials or between touching surfaces. But with the liquid layer being only a few molecules thick, this ubiquitous and important phenomenon has lacked understanding, until now.

Researchers at The University of Manchester’s Department of Physics have made artificial capillaries small enough for water vapour to condense inside them under normal, ambient conditions. The Manchester research published in Nature provides a solution for the century-and-a-half-old puzzle of why capillary condensation, which involves only a few molecular layers of water, can be described reasonably well using macroscopic equations and macroscopic characteristics of bulk water. Is it a coincidence or a hidden law of nature?

Important properties as friction, adhesion, stiction, lubrication and corrosion are strongly affected by capillary condensation. The phenomenon is also important in many technological processes used by microelectronics, pharmaceutical, food and other industries – and it holds sandcastles together.

Scientifically, the phenomenon is often described by the 150-year-old Kelvin equation that has proven to be remarkably accurate even for capillaries as small as 10 nanometres, a thousandth the width of a human hair.

Still, for condensation to occur under normal humidity (say, 30%-50%), capillaries should be much smaller, of about 1nm in size. This is comparable with the diameter of water molecules (about 0.3nm), so that only a couple of molecular layers of water can fit inside those pores responsible for common condensation effects.

The macroscopic Kelvin equation could not be justified for describing properties involving the molecular scale and, in fact, the equation has little sense at this scale. For example, it is impossible to define the curvature of a water meniscus, which enters the equation, if the meniscus is only a couple of molecules wide.

Accordingly, the Kelvin equation has been used as a “poor-man’s approach”, for the lack of a proper description. The scientific progress has been hindered by many experimental problems and, in particular, by surface roughness that makes it difficult to make and study capillaries with sizes at the required molecular scale.

To create such capillaries, the Manchester researchers painstakingly assembled atomically flat crystals of mica and graphite. They put two such crystals on top of each other with narrow strips of graphene, another atomically thin and flat crystal, being placed in between. The strips acted as spacers and could be of different thickness.

This trilayer assembly allowed capillaries of various heights. Some of them were only one atom high, the smallest capillaries possible, and could accommodate a single ‘flat’ layer of water molecules.

The Manchester experiments have shown that the Kelvin equation can describe capillary condensation even in the smallest capillaries, at least qualitatively. This is not only surprising but contradicts general expectations, as water changes its properties at this scale and its structure becomes distinctly discrete and layered.

“This came as a big surprise. I expected a complete breakdown of conventional physics,” said Dr Qian Yang, the lead author of the Nature report. “The old equation turned out to work well. It was a bit disappointing but also exciting to finally solve the 150-year-old mystery.

“We can now relax – all those numerous condensation effects and related properties are finally backed by hard evidence rather than a hunch like ‘the old equation seems working – therefore, it should be OK to use it’.”

The Manchester researchers argue that the found agreement, although qualitative, is also fortuitous. Pressures involved in capillary condensation under ambient humidity exceed 1,000 bars, more than that at the bottom of the deepest ocean. Such pressures cause capillaries to adjust their sizes by a fraction of angstrom, which is sufficient to snugly accommodate only an integer number of molecular layers inside. These microscopic adjustments suppress commensurability effects, allowing the Kelvin equation to hold well.

From macro to micro

“Good theory often works beyond its applicability limits,” said Geim. “Lord Kelvin was a remarkable scientist, making many discoveries but even he would surely be surprised to find that his theory – originally considering millimetre-sized pipes – holds even at the one-atom scale. In fact, in his seminal paper Kelvin commented about exactly this impossibility. So, our work has proved him both right and wrong, at the same time.”

Sir Andre could not help to wryly comment: “As you wonder about possible applications of our research … well, lately, many governments were quite successful in building sandcastles. Perhaps they can now use our results to put some scientific basis underneath those.” 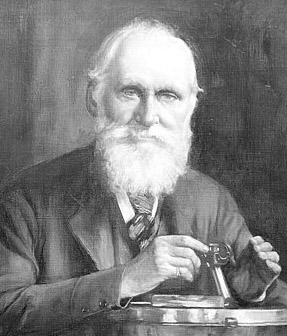 Sir William Thomson, later Lord Kelvin (1824-1907), first referenced his famous equation in an article entitled ‘On the equilibrium of vapour at a curved surface of liquid’ published in 1871 in the Philosophical Magazine. Kelvin’s significant contributions to science have included: a major role in the development of the second law of thermodynamics; the absolute temperature scale (measured in kelvins); the dynamical theory of heat; the mathematical analysis of electricity and magnetism, including the basic ideas for the electromagnetic theory of light; plus fundamental work in hydrodynamics.