The ‘accidental’ Nobel Laureates: 10 years on

With the launch of Nobel Week 2020 (5-13 December), we take an opportunity to reflect on the achievements of graphene pioneers Professors Andre Geim and Konstantin (Kostya) Novoselov, who were awarded the Nobel Prize for Physics a decade ago.

In their own words, these two brilliant physicists describe how their innovative ‘fail fast, learn fast’ approach to experimentation led to one of the most important breakthroughs in modern science, how graphene research continues to challenge established theories in physics and how, in applied forms, 2D materials are now at a tipping point in product commercialisation.

Two Manchester researchers who isolated the world’s first so-called ‘two-dimensional’ material went on to be rewarded with one of the highest accolades in science.

The Nobel Prize for Physics in 2010 went to Andre Geim and Kostya Novoselov “for groundbreaking experiments regarding the two-dimensional material graphene” – and this month marks the 10th anniversary since they attended that historic ceremony. 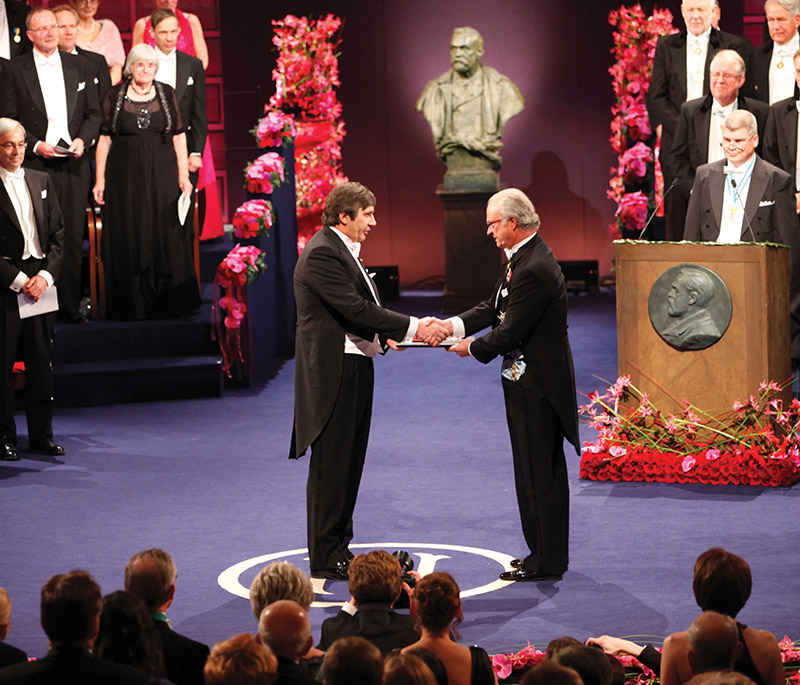 Their path to laureate status was almost by accident. Indeed, it was sheer, playful curiosity led Andre and Kostya to realise that they had managed to reduce graphite to a single atomic layer that possessed amazing physical capabilities.

At the time, Andre was supervising Kostya during the completion of his PhD and the pair hosted regular ‘Friday night experiments’, where they would try out ideas that weren’t necessarily linked to their day jobs.

Kostya makes clear that the special approach taken by his former mentor Andre was fundamental in the isolation of graphene, while Andre is keen to emphasise that the breakthrough was always a team effort that involved other colleagues. These included Professor Irina Grigorieva and Sergei Morozov,  who are still connected to The University of Manchester. “While several others are scattered around the world in academia and industry,” added Andre.

The origins of graphene

Graphene’s origin story is described in detail by Kostya in a special series of talks organised by The University of Manchester during the summer of 2020 entitled the ‘Lockdown Lectures’. Kostya was interviewed by Manchester third-year politics student Megan Ritchie and during their conversation he was asked how the isolation of graphene had come about.

Kostya explained: “The most important teacher in my life is Andre Geim, with whom I started to do my PhD in Holland some time ago.

“Andre always had, and has up to now, this interesting way of doing science through small projects, which we called the ‘Friday night experiments’ – and it’s really enjoyable working with him. Andre is known for his levitation of frogs, we’d also been doing gecko tape together and ‘magnetic water’; so graphene indeed was one of the Friday evening experiments, when you ask a question and try and resolve it with minimum effort spent. If it works that’s great; if it doesn’t work you haven’t wasted too much time.

“Graphene was one of those experiments. We tried, it failed, and we almost forget about this – [but] the story was, I was present in the lab when I saw people cleaning graphite to use in the scanning tunnelling microscope as a sample. I knew about this, when they take graphite and clean the top with this Scotch tape and throw the Scotch tape away. I have seen it many times before but it is only when your brain is thinking about how to make graphene and you put two and two together and you pick up this Scotch tape from the dustbin and make [an experimental]  transistor [device] out of it.

“It took us about a year to get to our first [graphene] devices and we were very lucky that we had a device with one layer and two layers of graphene and they behaved completely differently, that was how we knew [single-layer graphene had unique properties].

Playfulness rewarded with a Nobel Prize

In October 2004, Andre and Kostya co-published a paper announcing the achievement of graphene sheets in Science magazine, entitled “Electric field effect in atomically thin carbon films.” It is now one of the most highly cited papers in materials physics and by 2005 researchers had succeeded in isolating graphene sheets – so sparking a revolution in materials science which still has a huge impact today.

The graphene phenomenon led to Andre and Kostya being awarded the Nobel Prize for Physics. In the official press pack released on 5 October, 2010, the Royal Swedish Academy of Sciences made direct reference to Andre and Kostya’s approach to experimentation: “Playfulness is one of their hallmarks. With the building blocks they have at their disposal they attempt to create something new, sometimes even by just allowing their brains to meander aimlessly. One always learns something in the process and, who knows, you may even hit the jackpot. Like now, when with graphene, Andre Geim and Konstantin Novoselov have written themselves into the annals of science.”

After the Nobel Prize, Andre and Kostya were further rewarded by a grateful nation. The two Russian-born scientists were knighted in 2011 and then gifted the Freedom of the City of Manchester in 2014 (pictured above).  And this recognition of Manchester as the home of graphene helped attract some high-profile visitors, including President Xi Jinping of China, who witnessed the University’s graphene facilities first hand as a finale to his state visit to the UK in 2015. The next year, the Duke and Duchess of Cambridge followed in the Chinese premiere’s footsteps on a similar fact-finding tour.

The age of 2D materials

In an interview Andre gave to Adrian Nixon, editor of the Nixene Journal, hosted in the National Graphene Institute in December 2019, the Nobel laureate looked to put the graphene and 2D materials phenomena into perspective.

When asked why graphene had made such an impact on science and society, Andre replied: “Graphene is a new class of materials we were not even aware of just 15 years ago. It was completely hidden from materials science. And graphene is not alone, it has many brothers, sisters, cousins, and by now we have probably studied dozens of those, hundreds of those materials.

“It’s a new class of material and if we look at the history of the human race it’s gradually built up from the Stone Age, to the Iron and Bronze ages, etc. We now live in the age of plastics and silicon, so I wouldn’t be surprised that next we will be coming into the age of 2D materials.

“But it is not that quick to transition from one age into another age because, as we know, one of the big problems for 2D materials is that we don’t have tools – we are 3D humans so we have 3D tools, therefore it’s very hard to deal with completely new types of materials. But things are gradually coming into line and industrial applications are gradually increasing.

“You know graphene has so many superlatives. You’ve heard about those – the strongest, the most conductive, the most this, the most that, and so on. But one superlative that is particularly relevant to this audience, I believe, is this material is the quickest we’ve jumped from an academic lab into consumer products. That is another superlative of this material.”

Andre also provided an explanation for the perennial interest and investment in graphene research – he says graphene has a capacity to periodically reinvent itself to offer something new to pique the scientific community.

Andre said just as investigators felt research into graphene was  “getting boring” and physicists and materials scientists, including those based at Manchester, were tempted to study other 2D materials he noted “astonishingly, graphene reincarnates itself every few years” to provide a whole new field of study.

There has been, explains Andre, a series of significant scientific milestones since the original isolation experiments. “After graphene, there were graphene-like crystals and other 2D materials experiments; encapsulated graphene came along, offering the best so far system to study quantum physics in the electronic properties of materials.

“Then, graphene set up a stage for what we call van der Waals heterostructures, including graphene superlattices, which perform very strongly without any sign of exhaustion. The latest reincarnation was two years ago with ‘twisted’ graphene that delivered carbon-based superconductivity, ferromagnetism and a myriad of other complex, many-body effects.”

Graphene-related research continues apace at Manchester. Most recently a team led by Andre discovered and characterised a new family of quasiparticles named ‘Brown-Zak fermions’ in graphene-based superlattices that could lead to advances in quantum computing.

Looking back to those original experiments that would lead to the Nobel Prize and open a whole new frontier in materials science, Andre candidly concludes: “The ‘Friday sessions’ refer to something that you’re not paid for and not supposed to do during your professional life – that is research driven by pure curiosity. Something random, simple, maybe a bit unorthodox, even ridiculous. But without it, there are no discoveries.”