Teenage inventor and entrepreneur Ava Garside has earned multiple awards for her air-quality pin badge Perfect Sense AQ and is developing her product with Graphene@Manchester, supported by the ERDF Bridging the Gap programme for SMEs. We asked her about the background to her invention, a jam-packed last couple of years and plans for the future…

Do you remember when and why you first became interested in science?

It was Year 5 and 6 in primary school and my teacher Miss Rushbrook was massively into science and prompted me to look into it more. I remember it was the year that Tim Peake went up to the International Space Station, so we were watching him going up in the rocket and then we watched his space walk, repairing the outside of the ISS, in class together. We had a big discussion about it and it interested me straight away. I thought it was amazing that we could do these things and that’s what led me down the science and technology route.

What was the light-bulb moment that made you think of the air-quality pin badge?

There was a big push on air quality in the local community [in Leeds] at the time. It was around Bonfire Night when I first had the idea. There’s an enormous bonfire really close to where we live and even though we don’t go every year, there have been times when we couldn’t really breathe properly for days afterwards on our walk to school. That made me think about the air quality generally around here, and how it is affected by certain events, and how our own behaviour affects other people.

So how did you go from that spark of inspiration to an actual prototype air-quality sensor?

This was when I was 12 [in 2019] and I saw the Business of Science Conference advertising a competition for school-age kids to invent something and make a poster about it. We had some off-the-shelf air quality sensors in the house already, and I had this idea to make it into something people like me could actually wear. I got some fabric  from the local charity shop and made it into a prototype. I did have some help from teachers, though. My English teacher helped me with the poster, and my textiles teacher helped me to make the case for the pin badge. 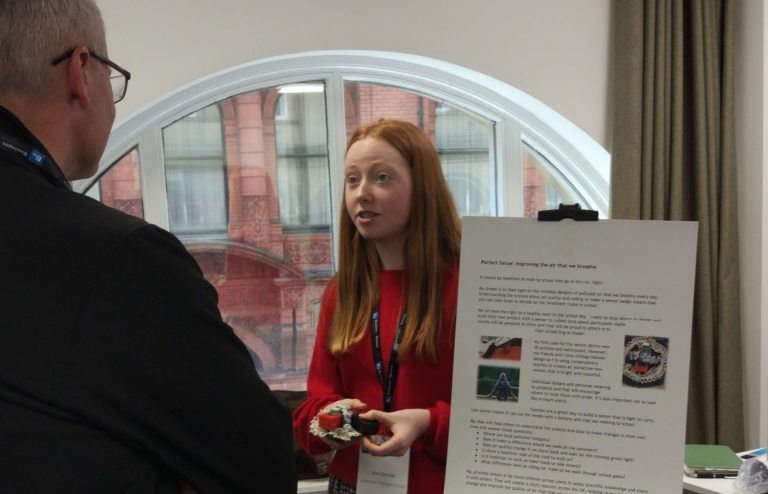 And you received a ‘highly commended’ award at the conference...

Yes, I went to the conference – which was in Leeds, so really handy for me – and that’s where I met James Baker [CEO of Graphene@Manchester]. There was a judging room and everyone had an easel with their poster on. During the lunchbreak in the conference, delegates were walking around and chatting and I got chatting to James for quite a long time (pictured above). He said he’d been judging my category and said my entry stood out as something that graphene could help with and why don’t we make it?

So then you went to the Graphene Engineering Innovation Centre…

Yes, there was a staff training day at school so I had the day off, went to Manchester and the GEIC, where [Printing Lab Manager] Liam Britnell gave me a tour of the building and [Energy Lab Manager] Craig Dawson came in for a meeting, talking about how we could take Perfect Sense AQ forward. From there we managed to make a prototype pin badge, putting the off-the-shelf sensor in a graphene case. Unfortunately, at this point lockdown happened and it was really difficult to get anything else done. But since then I’ve been able to get into the Bridging the Gap scheme, and that’s really helped.

The programme gives funding from ERDF [European Regional Development Fund] and so we’ve been able to do a literature review for Perfect Sense AQ and look at what is the art of the possible and how we can progress the concept even more.

Yes, so I started off with the Youth Industrial Strategy, run by the government. I won the Junior category on the AI and Data Grand Challenge, and then won SatelLife, run by the UK Space Agency. Both of these were competitions aimed at younger people and I was lucky with the YIS because I was at the top of the Year 7-9 age group and that helped me win my category, which was amazing. SatelLife was a bit different because it was aimed at students up to 22 years old, but I managed to work my way through the briefs in the rounds of judging. It’s exam technique, basically, of answering what’s actually in the question not what you think is there.

Was there a big reveal when you outed yourself as only 13?

The age range was 12 to early-20s so it wasn’t a huge shock, but the next competition – Galileo Masters – was a bit different because I had to submit an entry as an adult or be ‘incorporated’. Perfect Sense AQ is an incorporated company, which James Baker suggested, so I was able to get involved as a company.

I want to say that James and the others in the GEIC – Liam, Craig, Katy [Ainsworth] – always see my idea first and never my age. It’s been difficult in certain sectors, like space, where I can’t get a grant because I’d need to fund an office and I have to go to school. I also have to be over 18. But graphene staff have never given me a label or any barriers, so I’ve never had to hide my age from my work.

With the Young Green Leaders I was the youngest person there, probably by a couple of years, and there were lots of people in their 20s, which was great because it showed the calibre of group that I’m now associated with.

Then with COP26 [go to 13:13 on video], I felt like I was included because of my work and not age and we were talking about transport for the future. But it was really great to have my insight because everyone was talking about what the children of today will be doing tomorrow. And I was giving my perspective from being able to see the trends, social media-wise, of actually what is happening. So I can give that light to everything.

You’ve said one principle of Perfect Sense AQ is to help people generate useful data. Tell us more about that…

So, it all started with me trying to find the healthiest way to school. There’s a main road on the way but also a bit of a rat-run, where it’s quite quiet but you get cars going down there really quickly. I found out that at different times and in different weather conditions, the air quality in each was different. That prompted me to think about how other people could see this and understand it as well.

So Perfect Sense AQ was a tool to help children see the healthiest way to school. Now, three years on it’s about anyone who is walking, cycling, running – I’ve had enquiries from running and cycling groups – but also in industry, so what’s the air quality like on construction sites where people are laying concrete or cutting up bricks? When do people need to take a break if the air quality is really poor? That’s where the data becomes really useful for everyone.

What does the next 3-6 months look like for you and Perfect Sense AQ?

Carrying on with Bridging the Gap, seeing what is actually possible with the pin badge and then also looking at the data. How will the data look for the user on an app? And then with the Galileo Masters seeing how we can aggregate data from the satellites with the ground-level data to create a fuller picture and then predicting how air quality is going to change, like a weather forecast for the next 6-12 hours.

And are there lessons that you think might be applicable to other tech for health and wellbeing?

I think it’s all about education. With Perfect Sense AQ we’re looking at how you visualise the data. Moving into extended reality and seeing what’s possible with that and putting that onto this new world and showing it to children and adults. What’s happening now and in the future? What’s the outcome if we do or don’t make a change? I think that’s an important and impactful message because people find it really difficult to imagine what will happen if they make a change. But being able to see it will kickstart the process of understanding how changes – even little ones – will make a real difference to how we all live.

Find out more about Ava and her invention on the Perfect Sense AQ website.