Beware the graphene cowboys: how a ‘second gold rush’ makes standards more important than ever 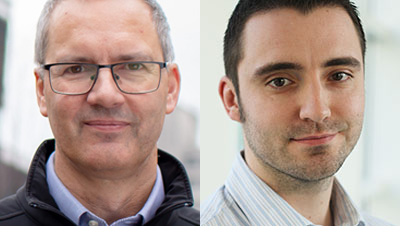 Graphene is at a tipping point for industry adoption but amid new market opportunities, you’ll also find opportunists. We caught up with Graphene@Manchester CEO James Baker and the National Physical Laboratory’s (NPL) leader on graphene characterisation Andrew Pollard to ask why standards for 2D materials are so vital and how the industry can avoid a repeat of what some refer to as “the hype and crash” of graphene’s earlier years.

The early years of graphene R&D were marred by a loss of industry confidence in the material. Can you give us the background to why and how that happened?

James Baker: In the early days of graphene, people started to see its potential. Andre [Geim] and Kostya [Novoselov] won the Nobel Prize [for Physics in 2010] and industry started to become interested, saw all these fantastic properties of graphene and started to engage.

So what we might call the ‘first gold rush’ started when people saw the potential, thought it’d be quite easy and they could just take some graphite, break it into graphene, add it as a coating or into their polymer or plastic, their rubber or battery, and it would improve performance.

But then the difficulty started because first of all, not only are there many forms of graphene, it’s also not a simple material to process into products and applications. It wasn’t as simple as just adding it. You have to formulate it correctly. To add it in the right way. You have to have the knowhow and you also need a lot of infrastructure to support it. Hence, here in Manchester, we built the National Graphene Institute [NGI] and more recently the Graphene Engineering Innovation Centre [GEIC].

We’ve been going on the journey now and are starting to get some real success, where people are learning to make the graphene not just by the gram, but by the kilogram, by the tonne. We’ve learned how to add graphene, how to mix it, how to formulate it into real products and applications.

We’ve learned that are many different forms of graphene, and that’s really as a result of collaboration between industry, academia and organisations like the National Physical Laboratory [NPL] that addresses the key issues around commercialising advanced materials.

Andrew Pollard: At that time you saw a lot of companies popping up around the world and saying, “I’ll sell you graphene.” Before it was isolated, graphene was a theoretical single layer but afterwards the lines between graphite and graphene got very blurred and you had terms such as bilayer graphene and few-layer graphene. You would have companies saying “this is few-layer graphene”, then you’d test it and find the particles would have around 300 layers. That’s not going to give you the improved properties you get with much thinner flakes. So you could be buying something labelled as ‘graphene’ but it could actually be anything.

There were no standards at that point, and it was very confusing for anyone who wanted to work in this area and would expect to be an end user rather than a materials producer. They’d end up just receiving a black liquid that doesn’t improve their product and therefore ‘all graphene is bad’.

We saw that a lot. That’s really where we started on our journey, defining standards in this area, starting with terminology, but also the way to characterise it, to define the different forms of graphene.

How do you even begin to pull together standards in such a complex area, and with so many national and international stakeholders?

Andrew Pollard: We were starting with lots of academic work in this area. In a way, that was also part of the issue as there was so much academic work in this area that, a new company coming in wouldn’t have the bandwidth to be looking at all the literature that was available. It was confusing. But it wasn’t as if we were starting completely from scratch. We were working within the framework of ISO TC229, which is a well-established international nanotechnologies technical committee. The problem of terminology isn’t a new thing – ISO TC229 already has a framework for defining nanomaterials because they’ve been doing it before with, for example, carbon nanotubes.

James Baker: It’s a good question, though: where do you start? This was a really complicated area, but we saw this as absolutely critical if we were going to commercialise graphene. So early on, we identified the need for a strategic relationship and partnership with NPL because they are the experts in this area.

Together, we developed good-practice guides for graphene and 2D materials. NPL understand it, they have the links to the British and International Standards Organisations. We saw how important this was, we went to the specialists and we created a partnership that underpins the effort towards commercialisation.

So from a practical perspective, when you saw that initial drop-off in confidence, how did you turn it around with commercial partners?

James Baker: So we knew there were some ‘cowboys’ out there, claiming they had graphene and it wasn’t really graphene. There was a lot of noise. There were a lot of false expectations.

We went on a journey of verification, validation, of how graphene could improve a product and its performance. And that’s a very structured academic-to-industrial process, involving scaling up, and higher TRLs [technology readiness levels].

There was academic work that we could build on, but it was really around this process of design experimentation that started discussions around having the GEIC as a place where you can take an idea, make something, validate it. If it fails, fail fast. If it works, iterate it and move on. It’s about gaining confidence with industry that they can get some performance improvements through the addition of graphene.

And the trend is now upwards…

James Baker: Yes. Some people think it’s going slowly, but comparative with other novel materials, carbon fibre etc, we’re moving very quickly. And we’ve now reached the stage where we’re working with people who are new to graphene and also starting to get a second wave of industrial engagement with people who tried graphene four or five years ago, failed, but are now seeing the increased potential. However, that in turn brings its own challenges with others sensing market opportunities.

Which sounds like it brings us to the main thrust of this article: buyer beware…

James Baker: Yes, there is a ‘Wild West’ or ‘gold rush’ element – whatever you want to call it – now, as there was before. There are a number of companies who have played it straight and gone through real pain over the past four, five, six years, stabilising processes, delivering to standards and specifications and making real progress in performance enhancement. But the risk we now have is other people jumping on the back of that, saying, “Oh, graphene looks easy. I can do that as well.” But they’re pretending, like the situation we had before, to be able to produce graphene by the tonne and just add it to applications and expect it to work.

So how do you help the industry avoid the mistakes of a decade ago?

Andrew Pollard: There’s a phrase that we use in the metrology community: confidence in data. Ultimately you need to be able to prove that you know what your material is. We’ve said there are standards now where you can characterise material to an ISO standard for few-layer graphene, graphene nanoplatelets etc.

So now I know what my material is and measured its different properties. If it’s going to be used in energy storage, a composite, or another application, you can then test that final product to a standard as well and show how it’s performing better than the state-of-the-art and what’s currently sold commercially. That’s how standards can now be used to support industry.

Then you can get that replicability of material in the supply chain, you have confidence in the data and in the material, you can reproduce the results and ultimately the end-user gets the performance uplift they were looking for and can manufacture it at scale.

In the end, it doesn’t matter whether it’s graphene or not that gives you improved performance – you just want better performance. But it goes back to having confidence in data to prove what is happening with your material and why. That’s how you build the robust supply chains that we need to fulfil graphene’s potential.

Finally, how would you advise a company that sees potential in graphene for their product and sees all these different claims on volume and performance?

James Baker: We’ve spent a lot of time gaining people’s confidence and understanding graphene, how to mix it, how to use it. And we’re making sure we don’t oversell it, but also we don’t want to undersell it. It’s a fine balance.

We’re seeing real benefits from graphene in terms of performance in products: running shoes, anti-corrosion paints, stronger concrete that cures more quickly. So we’ve now got real examples of what graphene can do but there’s still a journey to go along to verify, to commercialise and to take these products to market. And the concern is that there are people trying to capitalise on that increased confidence by overselling something that they haven’t really understood yet.

We’re not trying to sell graphene. We’re trying to sell solutions. But other companies in this ‘second gold rush’ want to exploit that without understanding that data, that rigour of standards. It’s really a warning that you shouldn’t believe everything you see on the internet – there are still some cowboys out there.

Someone who claims to be able to make hundreds of tonnes of graphene and just add it to make your battery work better is probably not making a valid claim. You really need the understanding and confidence of data through iterations of prototypes to be able to say that.

We’re seeing an increasing number of companies making incredible claims. I’m pretty sure that if we went to visit and actually looked behind the scenes, there wouldn’t be much there to stand those claims up.

Andrew Pollard: Coming back almost full circle to what we discussed initially, it’s really important to partner with the correct people to help you if you’re new to this particular area. We took the expertise of Manchester in 2D material science and NPL’s expertise in metrology and standardisation and put them together to achieve some really important advances in this field. And that’s the message to companies coming into this space: make sure that you are working with the right people to help you achieve your goals.

James Baker: The take-home message, I suppose, is that there’s no one product called ‘graphene’ that fits all applications. Nanoscience is complicated and each application requires a formulation carefully tailored to its purpose.

In the early days, many companies partnered with a graphene supplier. And they ended up finding out that graphene supply wasn’t ubiquitous. If it was the wrong graphene for their requirement, often that project ended in failure. Whilst there are many good graphene companies out there, by working with someone who’s not tied to a particular graphene source, you have the opportunity to avoid bias towards a particular form or method of producing graphene and be driven by the application challenge and not the particular material performance.

One of our lessons learned over the years is that we really recommend companies work with people who have the application knowledge and independence to meet the desired product requirements and then advise on what the most suitable form of graphene (or other 2D material) is for their application. That’s the best way to avoid repeating the mistakes of the past.

Find out more about how Graphene@Manchester’s capabilities around commercialisation of 2D materials at our website.