In this historical feature we explore Frank Adams (1930-1989) and his influential work.

J Frank Adams made fundamental advances in algebraic topology. He wrote five extremely influential textbooks on the subject and was one of the founders of stable homotopy theory.

After studying in Cambridge, Adams moved to Oxford as a Junior Lecturer. In 1957 he visited Chicago and Princeton as a research associate and returned to become College Lecturer at Trinity Hall, Cambridge. Following further time in Princeton, he took up a Readership at Manchester in 1962 and succeeded Newman as Fielden Professor from 1964 to 1971. Adams produced work of outstanding depth and originality throughout his career, including a seminal sequence of papers on homotopy theory that was completed during his first years in Manchester. He was elected a Fellow of the Royal Society at the early age of 34 and received the Society’s Sylvester Medal in 1982. The London Mathematical Society awarded him their Junior Berwick Prize in 1963 and their Senior Whitehead Prize in 1974. 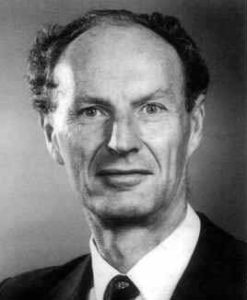