In this historical feature we explore Hanna Neumann (1914-1971) and her influential work.

Hanna Neumman (born von Caemmerer, 1914) was a prominent group theorist, most well known for her work on varieties of groups. She was an eminent mathematician, and at the same time the mother of five children (almost all of whom went on to become mathematicians themselves). She was married to B.H. Neumann, who was another of the great group theorists of his day. Her book `Varieties of Groups’ (Springer 1967) had an enormous influence on the development of the then blossoming theory of varieties of groups. The book was translated into Russian (Moscow 1969), and was instrumental in making Moscow one of the leading research centres on varieties of groups, the others being Oxford and Canberra. Apart from varieties, Hanna Neumann made important contributions to combinatorial group theory. One of the fundamental constructions in that area are the so-called HNN extensions; here HNN stands for Higman, Neumann and Neumann. Hanna Neumann was a lecturer at UMIST from 1958 to 1963, and she was not only the first ever woman to be appointed to a Maths position at UMIST, but also one of the most famous mathematicians ever employed at this institution.

From 1932 to 1937 Hanna attended the University of Berlin and after completing her first degree, she moved to Gottingden, where she became a research student of Hasse and was actively involved in the research group there. However, in 1938 she made the decision to abandon her graduate studies (and the increasingly disturbing political situation) in Germany and moved to Britain, where she was reunited with her soon-to-be husband Bernhard Neumann (the two had met in Berlin when Hanna was an undergraduate, and maintained correspondence in the intervening years).

In 1940, Hanna, who was then pregnant with her second child (Peter Neumann; another mathematical luminary) arranged to complete her doctoral studies in Oxford. Accommodation an issue at the time, she rented a caravan and got permission from a local farmer to park it on his land. It was in this caravan that much of her thesis was written (sometimes by candlelight!). Hanna was awarded her doctorate in 1944. After the war both Neumann’s held academic positions in Hull. Hanna remained in Hull, where she was gradually promoted to Senior Lecturer until 1958, when she was offered a lectureship at the University of Manchester Institute of Science and Technology. (Bernhard had previously taken up a lectureship at the Victoria University of Manchester in 1948.) The presence of the Neumanns resulted in Manchester becoming a hub for group theorists, with gaining reputation for strength in algebra; a tradition that continues to this day. 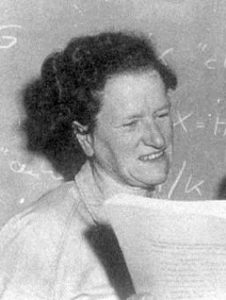 During the academic year 1961-2, the Neumanns were jointly invited to set up a new mathematics department at the Australian National University. This highly attractive offer marked the end of their time in Manchester. Hanna was initially appointed to a readership, and in 1964 she was the first woman appointed as a professor of mathematics in Australia, taking up the newly created chair of Pure Mathematics in the ANU. Hanna presented a paper on her work on varieties of groups (the work for which she is perhaps most famous) to the International Conference on the Theory of Groups, Canberra 1965. In 1969 she was elected to a fellowship of the Australian Academy of Science. In 1971 she gave a lecture tour of Canada. During this tour she was taken ill and, sadly, died suddenly from a cerebal aneurysm.