A new spider has been discovered, hiding in plain sight in one of the most populated places on the planet. And there’s a good chance it went undiscovered for so long because it doesn’t really look like a spider at all, but more like a fuzzy baby caterpillar.

Its cute, fuzzy appearance has led the newly discovered spider to be named Uroballus Carlei after Eric Carle – author of the wildly popular children’s book The Very Hungry Caterpillar.  But while the bug of the book was chubby and slow, the Uroballus Carlei is something of an athlete. 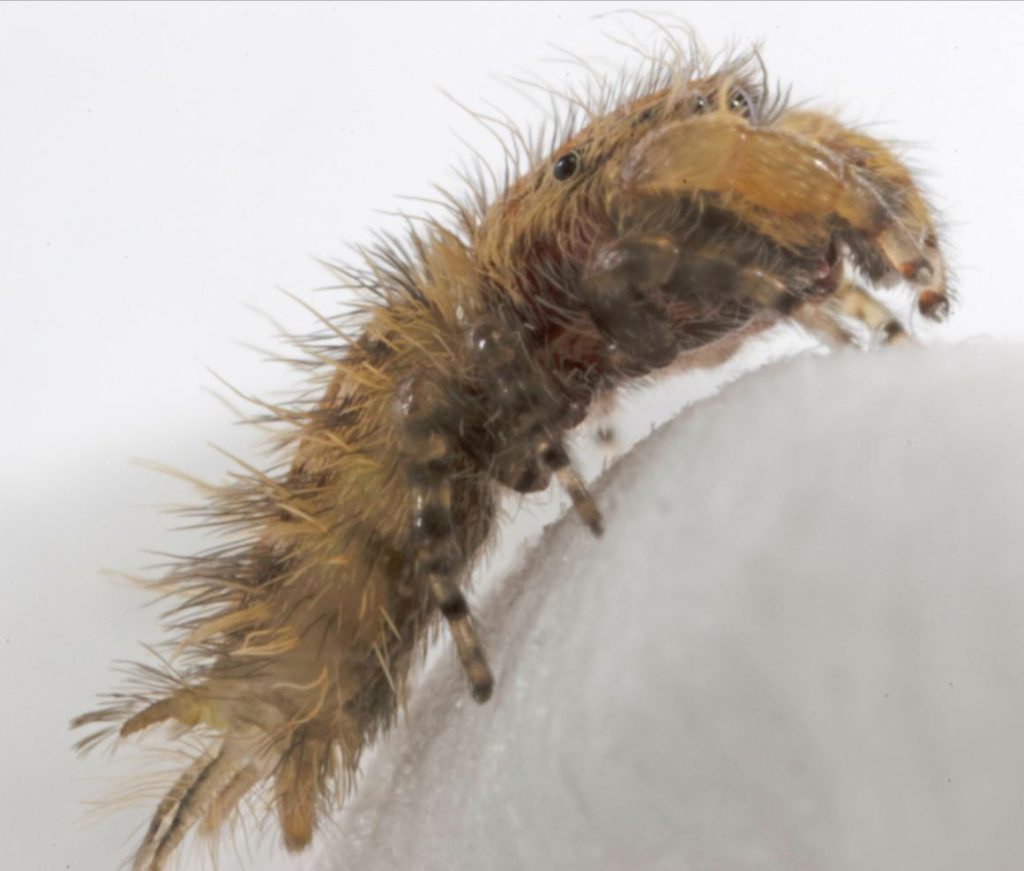 More than 6,000 of the world’s spider species are jumpers. They have a cluster of eyes of different sizes on their foreheads and often a further set just below their neck. This gives them unparalleled binocular vision, allowing them to precisely judge the distance they wish to jump.

As well as stealth, jumping spiders rely on the element of surprise to catch their victims. In fact, they are nicknamed “eight-legged cats” thanks to their ability to pounce on their prey.

And jumping spiders don’t just jump – they can dance too! Indeed, throwing shapes is an integral element of the creature’s mating ritual. The fur of the male jumping spider is bedecked in iridescent patterns in order to catch the female spiders’ (many) eyes. Dressed in this fabulous finery, they perform a dance routine made up of more than 40 different moves like slides, zigzagging and vibrations, which really drives the girls wild.

As you can imagine, jumping spiders are not the sort of creatures that blend into the background. Unfortunately, this means they are at risk of predators – and unlike other types of spider, their venom is comparatively weak and not enough of a deterrent to ward off a hungry enemy. However, the Uroballus Carlei appears to have found a unique way to protect itself from harm.

Perhaps one of the most incredible things about the Uroballus Carlei is the fact it has gone undiscovered until now, when it lives in one of the most populated places on Earth. The critter was first spotted by naturalist Stefan Obenauer in Chai Wan – an area of Hong Kong’s Eastern District famed for its abundant skyscrapers.

Obenauer reported the sighting to Dr Dmitri Logunov, Curator of Entomology at The Manchester Museum. Dr Logunov is a globally renowned expert in jumping spiders and confirmed Uroballus Carlei to be previously unknown to science. It has now been formally described in the Israel Journal of Entomology.

One thing that is particularly striking about the new species is that it actually looks more like a caterpillar than a spider – hence its name. This intrigued Obenauer and Dr Logunov, who contacted C&R Wildlife’s Roger Kendrick – an expert in the moths and butterflies native to Hong Kong. Kendrick revealed that living alongside Uroballus Carlei in the wooded areas of the Eastern District were lichen moths.

During the caterpillar stage, these moths are covered in bristly brown fur not dissimilar to the Uroballus Carlei. They live on a diet of lichen – a bizarre composite organism consisting of algae or cyanobacteria living alongside various species of fungi – and it’s this diet that gives them their name.

Lichen commonly contains toxins. Lichen moths have adapted to safely eat lichen, but other creatures aren’t so lucky. For this reason, predators tend not to target lichen caterpillars, as they are as toxic and distasteful as their diet. Add to this their hairy bodies and the caterpillars aren’t exactly Cordon bleu.

Which brings us to our friend the Uroballus Carlei – because its athletic figure is long and slim line, and it also has a magnificent coat of brown hair, it closely resembles the lichen caterpillar. Dr Logunov concludes that this helps it to mislead and therefore escape hungry predators.

Uroballus Carlei is not the first jumping spider to be celebrated here at The University of Manchester. In May last year, we reported how scientists from the School of Earth and Environmental Sciences and the School of Mechanical, Aerospace and Civil Engineering had successfully taught a spider named Kim to jump different heights and distances from a specially constructed diving board.

Now you have to admit, even if you suffer arachnophobia, it doesn’t get cuter than a spider called Kim leaping from a teeny tiny diving board! Find out more about Kim in this article.