Welcoming President Xi Jinping of China to the NGI

On Friday 23 October 2015, Chinese President Xi Jinping visited the University. There was no doubt that day would be a big day. Fortunately, after planning and rehearsing for quite a long time, I wasn’t feeling that nervous. I arrived early in the morning, but there was already a crowd of thousands opposite the National Graphene Institute, with Chinese flags and banners saying ‘Welcome’ to President Xi.

Shortly after, senior UK ministers arrived – George Osborne, James Wharton and Jim O’Neill. We were waiting at the south entrance of NGI, until the crowd began cheering. I knew the story was about to begin.

After a warm welcome and greeting to President Xi, our President and Vice-Chancellor Dame Nancy Rothwell gave a brief introduction about The University of Manchester and the Chinese community in this city. Graphene research and some of the collaborative achievements with Chinese scientists and engineers were highlighted in the following presentation by Prof. Novoselov.

As an interpreter, I was very careful, I just didn’t want to miss a single word that may trigger a new commercial collaboration afterwards. What surprised me is Prof. Novoselov’s gift – a traditional Chinese style painting which he presented to President Xi. What’s more intriguing is that it was actually painted using graphene ink. 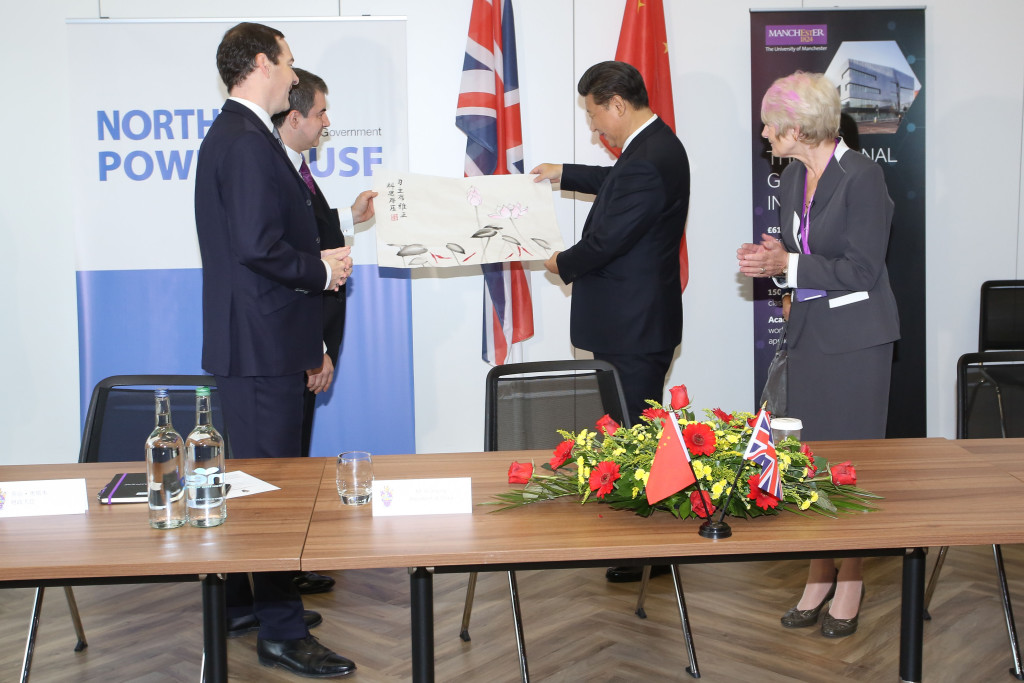 Dozens of commercial prototypes developed at the NGI were introduced to President Xi; including fabric with printed graphene circuitry, ultra-strong composites, supercapacitors which charged mobile phones in seconds, biomedical applications, and efficient lighting systems. One could definitely feel President Xi’s interest from his discussion with Prof. Novoselov on the sources of graphene, and how it can be produced. After a short tour to the 1,500 square metre cleanroom lab – the heart of NGI – the President and Prof. Novoselov kindly invited each other for a further visit in the future.

I have been at this University for about four years, but never thought I would have the chance to experience something like this. I always feel proud because I chose to research graphene for my PhD project. As time goes on, one can easily witness the progress of graphene and 2D material developments in the past 11 years, since it was first isolated and identified in its home town Manchester in 2004. 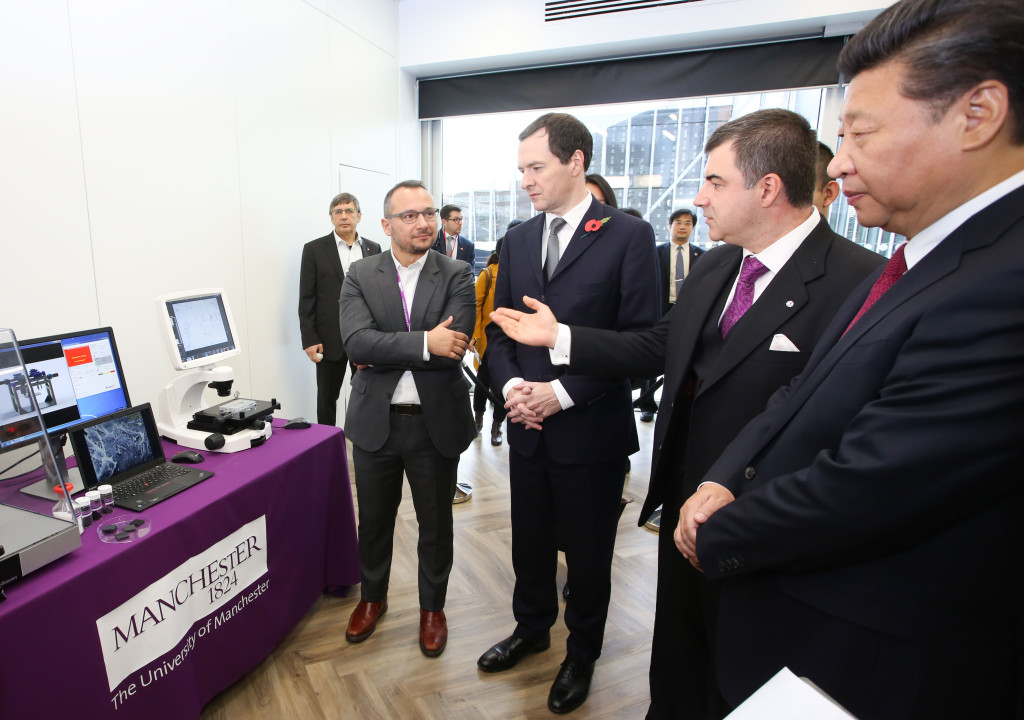 After those years, what makes the research still bloom is the potential for innovative and disruptive applications that drive the industrial world to invest. If those applications receive enough investment in fundamental research to progress, I believe it could revolutionise the world. President Xi’s historic visit could definitely bring more input from China to the UK, which would accelerate graphene commercialisation, apart from research, to another level.

The impact of this milestone visit might be even far more than just graphene. The strong link between UK and China, especially on high tech fields, will clearly be strengthened again. A series of linked events, including Chancellor George Osborne‘s visit to China earlier this year, implies the two countries will together bring a brighter next stage of development.