Graphene’s potential to revolutionise the world

Last week over 100,000 people from across the globe descended on the mobile capital of the world, Barcelona to attend the Mobile World Congress (MWC).

Spanning over 240,000 square meters of exhibition space the MWC is the world’s largest mobile conference allowing businesses the opportunity to showcase the next big thing in mobile technology.

The Graphene Experience Zone featured the latest innovations from the graphene community, showing developments in composites, energy, sensors, wearables and health to name but a few.

Whilst out in Barcelona one of the most asked questions (other than what is graphene and what can it do?) was why are you here?

My answer: graphene has the potential to revolutionise the world.

The world’s first two-dimensional material taken from a lump of graphite was isolated in 2004 by two physicists based at The University of Manchester: Andre Geim and Kostya Novoselov.

It was found to be 200 times stronger than steel, lightweight, flexible, transparent and more conductive than copper (superlatives that will be forever grained in my memory after explaining it to thousands over the four days!).

Due to Andre and Kostya identifying the incredible properties of graphene, they were awarded the Nobel Prize in Physics in 2010, giving graphene the pedigree status fitting to a material that has the potential to change the world. Since then graphene has opened up the potential for a variety of different applications. 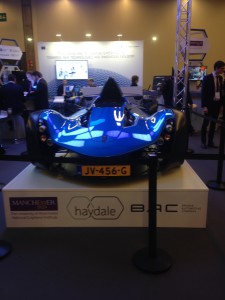 One of the main attractions to the stand was the graphene supercar. Developed by BAC and Haydale, the front and back wheel arches have been incorporated with a graphene composite that make the material lighter without compromising on strength.

But it doesn’t stop there. Using graphene can also make an existing material stiffer or more flexible depending on the percentage of graphene used.

In fact using graphene and other 2D materials has allowed researchers to create designer materials that can be tailor-made to a specific purpose without limitations.

Perhaps more inline with the theme of the conference, graphene could also be used in mobile phones, due to its flexibility and transparency we could create phones that wrap round your wrist, or we could use graphene to replace lithium ion batteries in mobiles. Doing this could allow us to extend the battery life and charge phones faster. 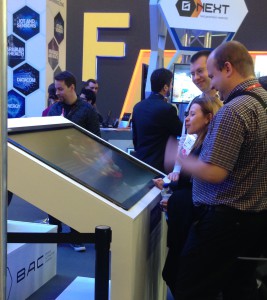 Graphene can also be incorporated into textiles; we could build a charging pad within the fibres of your clothes meaning that you wouldn’t need a charging cable but rather slip your phone into your pocket and charge whilst you’re on the go.

Graphene lends itself to other areas, including sensors, biomedical applications: cancer treatments and drug delivery, water filtration and gas separation. The beauty of graphene and what makes is so special, is its versatility.

Part of the reason for exhibiting at the MWC was to show graphene’s potential to businesses and how it might offer solutions to industry problems.

This is one of the main reasons why the National Graphene Institute (NGI) and Graphene Engineering Innovation Centre (GEIC- due to open in 2018) were established at The University of Manchester so that academia and industry can work side-by-side to develop graphene into real world applications.

So as the last day came to a close and we packed up our wares, I’d like to hope we’ve planted a seed of inspiration into industry’s mind. After all, the route to graphene commercialisation cannot be done by academics alone.