Guest post: Update – evaluating the resilience of our electricity network during COVID-19

Earlier this year we featured a guest post discussing the resilience of our electricity network during periods of crisis – and how the lights were being kept on during the COVID-19 pandemic. Now, at the end of this most challenging of years, Matthias Noebels and Dr Mathaios Panteli of the Department of Electrical and Electronic Engineering return with a follow-up piece.

This time, they shine a light on what the data tells us about the UK electricity network’s resilience during these unprecedented times.

At the beginning of the UK lockdown implemented in March 2020 to prevent the uncontrolled spread of the COVID-19 pandemic, opinions were divided on whether our electricity networks would be fit for the upcoming weeks. UK Power Networks, operator of the distribution network in South East and East England, including London, advised its most vulnerable customers to keep a “torch handy”, as well as “hat, gloves and blanket” amid fears of power cuts, followed by some newspapers panicking of imminent blackouts.

The UK Energy Research Centre has argued that staffing might become an issue for network operators, as workers experience symptoms of the disease and are forced to self-isolate. In our earlier guest post we outlined the measures taken by operators both nationally and internationally to ensure reliability of supply, and called for an increased awareness of organisational resilience.

Reliability usually refers to more frequently occurring power cuts, for instance caused by transformer or line faults, which the grid is designed to deal with, affecting only a very limited number of people. Resilience deals with extreme, widespread but rare blackouts, often caused by natural hazards and extreme weather and affecting hundreds of thousands of people.

During the last year we collected live power cut reports published by the UK’s distribution network operators. For example, power cuts for the North West of England, including Manchester, can be found on the Electricity North West website. Data shows that prior to lockdown the UK faced on average 547 power cuts per day, including scheduled maintenance works.

During the initial phase of the national lockdown, starting on 23 March and ending with the first easings on 11 May, this number dropped to as low as 373 power cuts per day. Afterwards, the average number of outages per day climbed up again to 517. The mean time until restoration after a power cut dropped during lockdown by ten minutes. 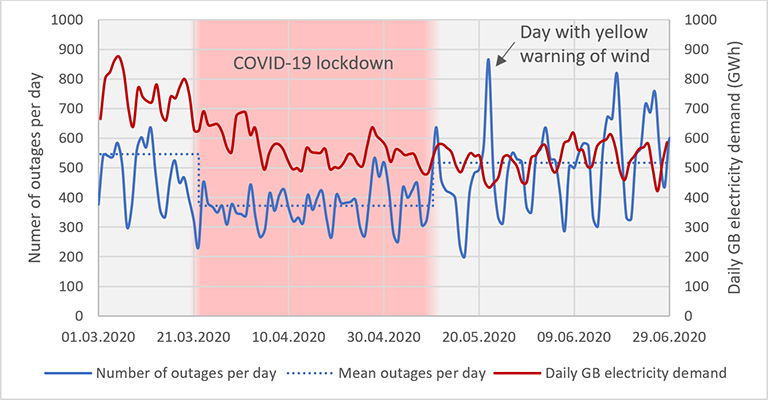 ^Figure 1: Power cuts and demand in the UK electricity networks during COVID-19 lockdown.

During the first weeks of lockdown a significant change in daily UK electricity demand was observed. Demand on weekdays had dropped by around 20% to weekend levels, as people stayed at home and large parts of the economy were forced to shut down. The reduction in demand and resulting potential oversupply of electricity during lockdown was seen as another risk factor for electricity networks. Electricity demand slowly increased with lockdown easings, and is now said to have returned to normal levels.

The drop in power cuts can be due to several reasons. First, it can be due to the efficiency of network operators’ pandemic planning, which includes contingency planning, prioritisation of emergency repairs and suspension of scheduled maintenance. Secondly, the power cut data shows – as observed from our own research (Figure 2) – a correlation with demand, meaning that a network under less stress, eg reduced electricity demand during weekends, may also fail less often. 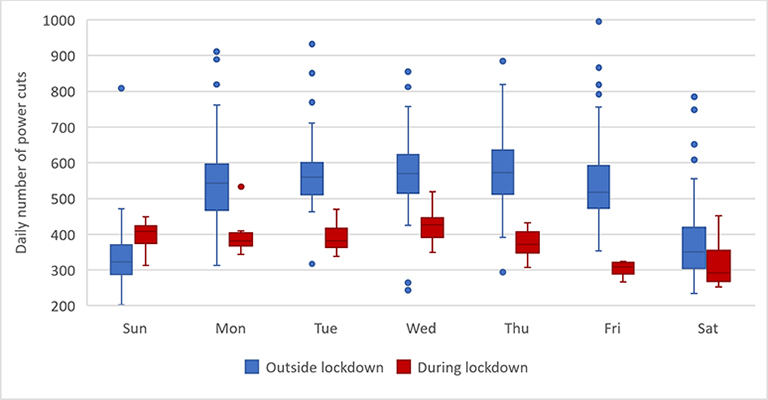 ^Figure 2: Daily number of power cuts for different weekdays outside and during lockdown.

The main message we can take from this is that resilience and reliability of the UK electricity supply have so far not been significantly affected by the COVID-19 pandemic. Neither did we experience any widespread blackouts, nor did we face a noticeable increase of power cuts. The measures taken by operators and regulators seem to have been effective. However, it is yet to be uncovered whether operators now have a backlog of maintenance and reinforcement projects that needs to be worked off in the near future, if we want to maintain or even enhance the UK’s electricity grid reliability and resilience.

Electricity networks worldwide are in a phase of drastic changes, as we need to reduce our carbon footprint and adapt for climate change. At The University of Manchester, we develop dedicated strategies and models for the assessment and enhancement of electricity network resilience, which are used by researchers worldwide. We analyse the reasons for power cuts, identify vulnerabilities and contribute to a stronger electricity network. 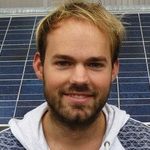 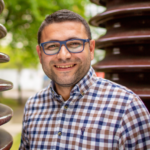