Inside the drone – the effects of being struck by lightning

Research impact and institutes 11th May 2017

In short, if your drone gets struck by lightning, you’ll have to buy yourself a whole new one so it’s probably best not to fly in a thunderstorm!

After a day in the lab with YouTuber Tom Scott and the EEE High Voltage Lab team I was frazzled but that was nothing compared to the drones. They had really taken a pasting, which was to be expected considering they had just endured a lightning strike of a million volts.

Surprisingly, both of the drones still showed signs of life after their ordeal so I took one home to see what had really gone on inside the shell and whether there was any chance that it could be repaired. If I could determine what parts of the drone failed, perhaps this would help to protect future drones from suffering the same fate (if you still decide to fly it in a thunderstorm). 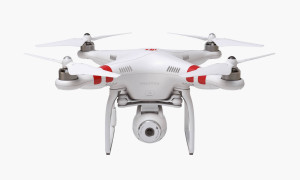 On first inspection, the drone had very little visible damage, but as I removed the outer casing, the effect and extent of the destruction became apparent. The plastic surrounding the compass header was quite severely damaged and the printed circuit board (PCB) for the compass was blackened; an unfortunate addition to the electrical BBQ. Regardless, I connected the compass module to my testing equipment but was unsurprised to see that it returned multiple electrical shorts – the whole of this part of the drone was dead. 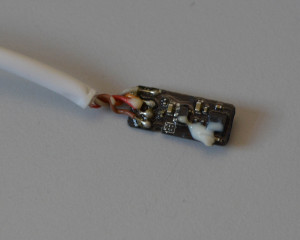 I imagine the damage here can be attributed to the lightning exiting from the compass module. You can see this in the photos and videos from the experiment. After all, electricity always takes the path of least resistance and this hotbed of electrical components and wiring – especially the thick wire from the main control board – would have been perfect for the lightning bolt.

Next, I took a look at the camera module and the legs. These seemed to have escaped the worst of the damage, so I was hopeful as I removed the drone’s casing to take a look inside. Once under the shell I noticed an electrostatic discharge (ESD) shield covering all of the internal electronics – this would have gone some way to protecting the components from surges in electricity, but I don’t think the makers of the drone really thought they’d be deliberately flown in a lab where they’d be electrocuted.

You could see that the shield had sort of done its job but it wasn’t enough. There were scorch marks right across the surface of the ESD shield and several of the chips from the circuit board had de-soldered themselves and instead attached themselves to the ESD shield. When the lightning struck there could have been a huge increase in temperature inside each of the chips (even if only for a span of micro seconds), which likely would have caused the de-soldering. 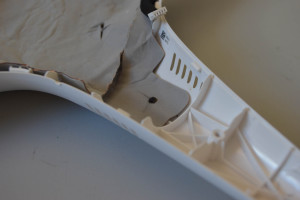 Back to the printed circuit board. Surprisingly there was no damage to the socket for the compass board, but I found that the chips that had detached and reattached themselves to the ESD shield were directly in-between the zapped motor and compass socket. After all, lightning always takes the path of least resistance, which in this case was probably the ground connection within the sandwich of copper that makes up the PCB. As with the compass module, the whole PCB had shorted out and would be another part you would have to replace if you wanted to get the drone flying again. 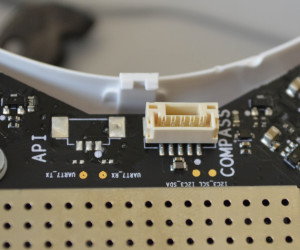 The Phantom 3 drone uses a microSD card for its memory; this card stores all the information required to make the drone fly. Initially this looked like it might have survived the strike – there didn’t seem to be any visible damage. However, when I connected it to my computer it wasn’t recognised; the drone had sadly lost its mind. 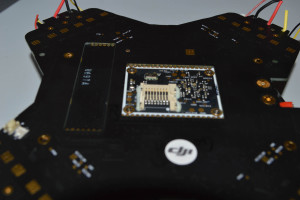 It was time to move on to the motors – could this drone power its propellers again? I tested them at the University’s motor laboratory and, hooray, they were alive! I suspect that they survived due to their metal casing which acted as a Faraday cage protecting the coils inside. Despite this, I wouldn’t be surprised if the motors failed if they were put back into use. 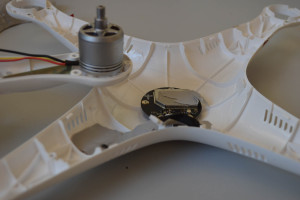 So, after taking apart the drone and inspecting each of the main components, I was surprised by the lack of physical damage. But this surprise didn’t last long when I saw how much the electrical components had suffered.

To get this drone working again, you would have to replace nearly everything inside it – so you might be better off just buying a new one and not flying it in a lightning storm!