Postgrads have a hand in future of bionic engineering

A team of postgrads from The University of Manchester have emerged victorious from an international competition, thanks to the creation of a 3D-printed bionic limb. They hope soon to make the design available to the public without charge.

What started as (and remains) a final year Mechanical Engineering Master’s project has resulted in Alex Agboola-Dobson and his team – lead electrical engineer Sebastian Preston-Jensen, lead software engineer Panagiotis Papathanasiou and mechanical and software engineers Maximillian Rimmer and Shao Hian Liew – being named victors of the Digital Innovation Challenge. The competition formed part of the Industry 4.0 Summit in Manchester last month, where participants were asked to come up with a solution to any of the challenges related to Industry 4.0.

Industry 4.0 is the term given to what some regard as the fourth industrial revolution. At its centre is the connectivity of people and things; how this can improve the efficiency and flexibility of industry and make it smarter. The judges were looking for a team offering a solution that was innovative and novel, practical and had the potential to be rolled out to market.

Sci-fi and fantasy fiction is filled with characters with prosthetic or bionic limbs. From Jaime Lannister’s solid gold hand and Captain Hook’s… hook, to Anakin and Luke Skywalker’s father-and-son bionic limbs, fictional prosthetics come in all shapes and sizes. In reality, however, the choices are far more limited.

Currently, people in need of prosthetics have the choice of a low-cost replacement limb with extremely limited functionality that relies solely on the wearer’s movement, or advanced robotics that can replicate complex movements – but come with a price tag starting at $45,000. Alex and his team, who are part of the School of Mechanical, Aerospace and Civil Engineering, quickly saw a gap in the market – affordable prosthetics with functionality – and came up with a plan to fill it.

The result is the LASO System – a bionic hand controlled by muscle sensors placed on the wearer’s arm that can be paired with an Android app designed by Panagiotis, the team’s lead software engineer. The limb connects to the three muscle sensors in the arm. It can then be programmed using the app to perform simple tasks, such as clicking a mouse or stirring a pan.

While the functionality is customised through the phone app, the muscle sensors provide the control by acting as on/off switches to move the hand whenever necessary. In fact, there’s very little the hand can’t do – as part of the demonstration, the team invited people to play a game of rock, paper, scissors against it. 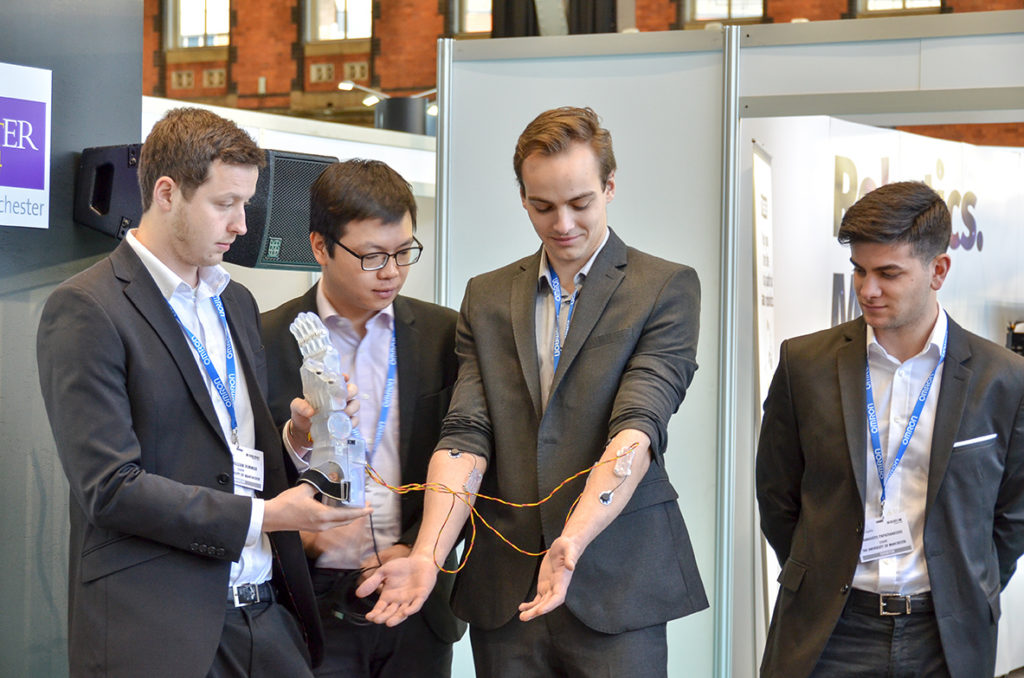 Reducing the digits with 3D printing

Best of all, the whole thing cost just £307 to produce – not much more than a top-end kitchen blender. And the team are confident they can bring this cost down further still.

The team used SLA printers to produce the hand because “the resolution is so good”. However, moving the manufacture to FDM printers will make the manufacturing process more economical, as these printers are more widely available. Switching the printed material to a cheaper plastic will also cut costs.

Reducing manufacturing costs is important to the team, as they have pledged to make the design for their prototype open source. This means that it will be available for anyone who needs it to use and produce their own prosthetic hand for free.

“It seemed the right thing to do,” says Sebastian, lead electrical engineer on the project. It means that people who have lost a hand could soon regain some of the functionality that’s been taken from them without worrying about the financial cost. 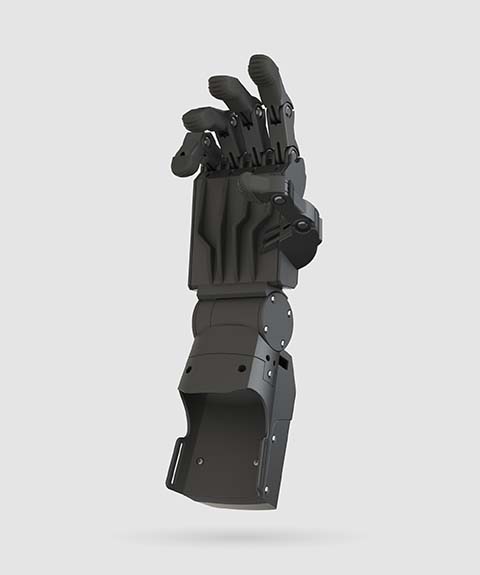 Staying away from uncanny valley

And we’ve got to hand it to the team (sorry), because there’s one thing we can say for sure – this hand does not look cheap.

Alex, who is also lead design engineer on the project, says it was important to “make it look cool. We want people to be proud to use it”. Sebastian echoes this sentiment, saying that the team took care to make the limb look like what it is – a bionic hand – rather than attempting to mimic a human hand. “We didn’t want to replicate a human hand, but embrace the fact that it’s not,” he explains, with Alex adding that manufacturers that have tried to make prosthetics more lifelike have ended up with something “a bit uncanny”, which can be off-putting.

The result is a sleek robotic hand clad in black like Darth Vader’s glove, and with a clear plastic interior that lets you admire the engineering handiwork within.

It certainly impressed the judges of the international Digital Innovation Challenge, and the team won £2,500 to further their project. But first, there’s the small matter of completing their Master’s project and handing it in for marking. Let’s hope that bionic hand knows how to cross its fingers!