What does the future hold for Sellafield?

What does the future look like? It’s a tough question to answer. After all, the world is so different today to how it was 100 years ago.

In 1920, there were no computers; no antibiotics; no mobile phones; no internet; no supermarkets; few homes had reliable electricity or their own car, and international holidays were reserved for the super-rich. The world today would be almost unrecognisable to a visitor from 1920 – so imagining the world in 2120 is a Herculean task.

However, the future is very much on the agenda for the UK’s nuclear research and industry sector. The University of Manchester is leading Sellafield Site Futures – a project funded by the UK Energy Research Centre. The focus is the Sellafield Nuclear Plant in Cumbria, which is to be decommissioned over a 120-year period, with an end date of 2140.

Among the questions being considered are what will be done about the waste currently stored on the site, which can take millennia to deteriorate. So, you can see why we’re obsessed with picturing the future.

As part of Sellafield Site Futures, the artist Wallace Heim has produced three pieces inspired by Sellafield, its heritage and its future legacy, for an exhibition entitled x=2140. The first – Future Font – is a shell-lined basin containing sediment collected from the site by Callum Robinson, a PhD student at the Department of Earth and Environmental Sciences. The piece represents the quandary of how to care for the life on this patch of land, both now and in the future.

Callum says: “In the laboratory we use the sediment to set up systems that mimic the geology and hydrology that underlies Sellafield, to study the ability of various treatment methods to retain contaminates, with the aim of delivering an optimised in-situ treatment strategy to Sellafield.”

A second piece, Knowledge Font (pictured further down article), shows the “shapes of knowledge” buried deep underground, along with “silences and secrets”, according to the artist. This is topped with mossy ground and a container full of seeds.

Finally, Font No 1 (pictured above) is reminiscent of the ‘golf ball’ Windscale Advanced Gas-cooled Reactor, which was shut down in 1981. The structure is inscribed with a map of other nuclear sites and images of cement taken under a scanning electron microscope.

Says Natalie Byrd, also a PhD student at the Department of Earth and Environmental Sciences, who took the images: “The main features that can be seen on the surface of the cement are various different types of crystals, or polymorphs, of calcium carbonate (CaCO3) – the same mineral that makes up chalk.” She adds: “This particular piece of cement had been part of an experiment investigating the impact of biological reactions on low level radioactive wastes disposed of within the Low Level Waste Repository facility in Cumbria.” Studying these reactions can provide scientists with some understanding of how radioactive waste will behave over a prolonged period while in storage.

The behaviour of radioactive waste over a lengthy period is a vital consideration for anyone connected with the Sellafield site. The plant is in the process of being decommissioned – but as it will take more than 100 years to complete this journey, it’s a multi-generational task.

Once the decommissioning work is complete, any radioactive waste stored in or near the area can take tens of thousands of years to decrease in threat. It’s this quandary that’s at the heart of the Sellafield Site Futures project.

Sellafield, formerly a Royal Ordnance Factory, began producing plutonium in 1947. For the next decade, it was central to the UK’s nuclear weapons programme, before it was taken over by the United Kingdom Atomic Energy Authority in 1954.

It took just five years to design and build the Windscale facility – transforming Sellafield from a munitions factory to a working nuclear facility. It will take around 100 years to decommission it – and more than ten times that for the legacy waste to degrade.

The site is at the centre of the country’s nuclear reprocessing efforts. This sees uranium and plutonium separated from the fission by-product and recycled, while the remaining waste is stored. Typically, radioactive waste accounts for just 4% of the spent fuel in nuclear plants. However, the threat to health and the fact this threat takes so long to reduce means it has to be stored safely and securely. 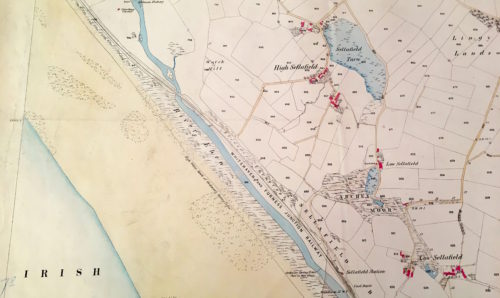 Currently at Sellafield, waste is stored in silos and ponds. Only a very small amount of nuclear waste is classed as high risk. The rest can often be recycled into nuclear fuel to power thermal reactors. The waste that is too radioactive is dried and mixed with glass – which is highly durable and is able to immobilise the nuclear material.

If the waste was generated by nuclear power plants in the UK, it is stored on-site at Sellafield. However, any waste produced elsewhere is vitrified with glass and then returned to its country of origin.

The storage units at Sellafield are secure – but they are running out of space. One of the big unanswered questions hanging over the future of the site is where this waste – which takes thousands of years to degrade – will be stored long-term.

The most popular idea is to build an underground storage unit somewhere near the plant – but as yet a site has not been agreed or secured. Another issue with this is that the waste is locked away and cannot be seen, so there is no way of knowing how close it is to fully deteriorating. And as the whole process takes so long, there’s also no real way to test this in a laboratory setting.

Due to the erosion process taking millennia, there’s also the question of how to keep future generations away from the site – and away from opening up a potential Pandora’s Box. We don’t know whether language in its current form will even exist by then – so working out warning systems is another quandary to consider.

Action in a time of uncertainty

“One major question that came up at the Sellafield Site Futures workshops we organised last summer was: How do you take action in a state of uncertainty?” says Petra Tjitske Kalshoven, a Dalton Research Fellow. “I’d like to think that x=2140 is a form of taking action, a moment where we are allowed to view things differently.”

Adds the artist Wallace Heim: “I came away from the Sellafield Site Futures workshops thinking that all the usual procedures for decision-making will be inadequate for the importance of the decisions and actions needed over the timescale of 120 years for the full decommissioning of the site.” Wallace continues: “Too, for me, the core of these pieces is the more philosophical questions of how to care for the lands, the soils, waters, elements, airs and living beings as they shift and migrate and settle over these coming generations of transformation and uncertainty.”

x=2140 is open until 28th March at the Florence Arts Centre in Cumbria. You can find out more about the Sellafield Site Futures project on The Beam.

Images – The University of Manchester, The Beam