In pictures 3: In black and white, science and engineering at Manchester

Everything looks good in black and white, right?

For the third – and final – instalment of our ‘In pictures’ series we’ve once again raided the University’s image collections (Luna and Manchester Digital Collections), this time selecting the striking black-and-white images that best document our science and engineering heritage.

Here’s what we found… 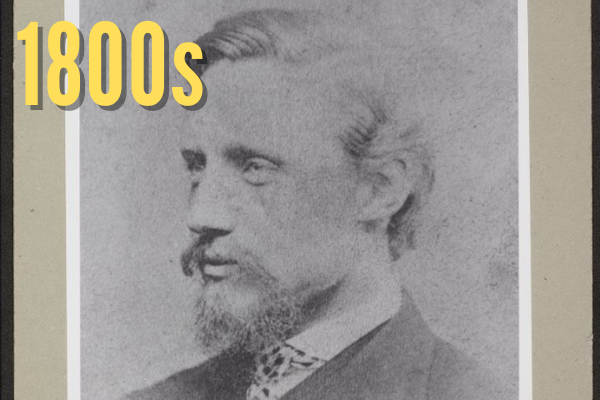 Osborne Reynolds was the first Professor of Engineering at The University of Manchester – from 1868 to 1905. This portrait print is of Reynolds as a young man; today he lends his name to Osborne Reynolds Day, an annual event organised by the Department of Mechanical, Aerospace and Civil Engineering. 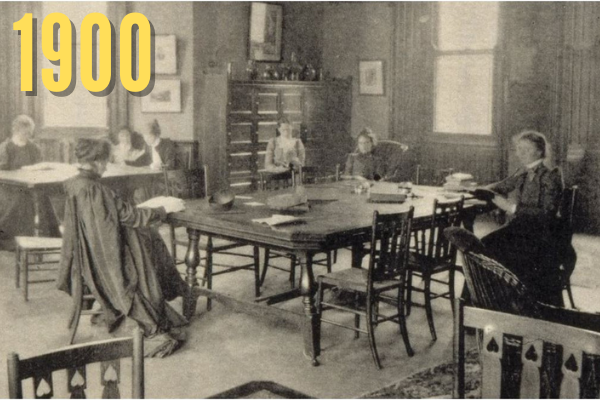 The above image is of the common room for women students in Owens College, taken in 1900. Our University can trace its roots back to the opening of Owens College back in 1851. 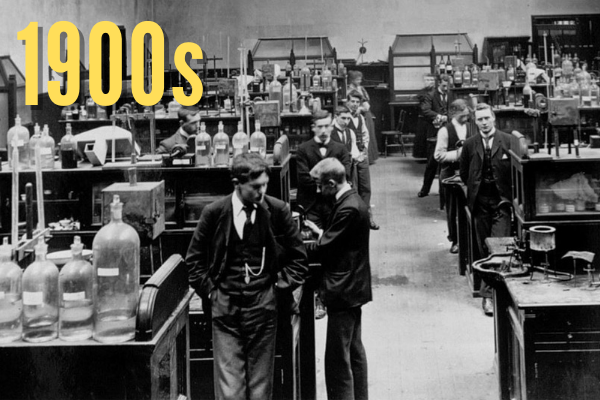 Smartly-dressed students in the Roscoe lab, which would later be a part of Student Services. Note the lab benches covered with various bottles, phials and scientific paraphernalia. The wall to the right would have looked out onto Burlington Street. 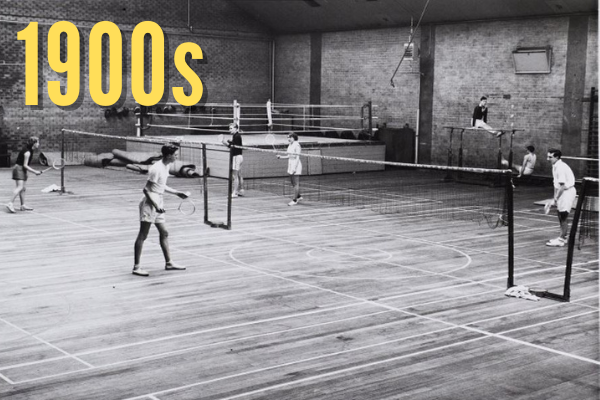 Fault! Students play badminton and work on the parallel bars in the McDougall Centre, with an empty boxing ring in the background. The centre, on Burlington Street, was formerly a military installation and was also used as an Islamic Prayer Hall. It was hit by a bomb during the Manchester Blitz in 1940. In 1903 members of the British Association came to visit Manchester’s Physical Laboratories – and posed for this portrait. Among those pictured are Arthur Schuster, C H Lees, Frederick Soddy, Joseph Larmor, Ludwig Boltzmann, and Éleuthère Mascart. 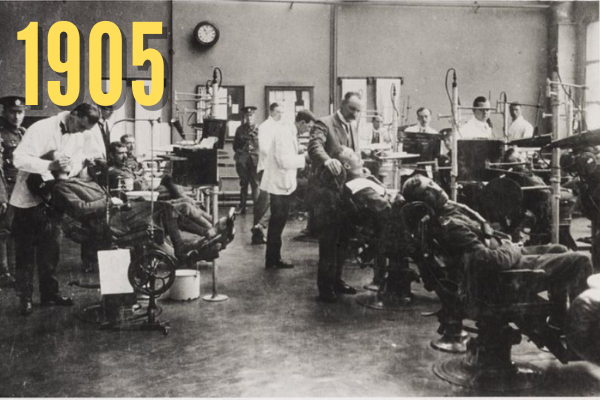 Open wide! This image has real bite, and was taken inside the conservation clinic of the old dental building next to Manchester Museum on Oxford Road. The building would later become part of the museum extension. 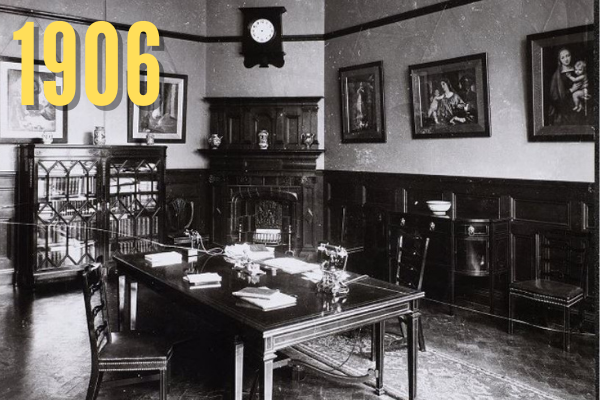 Now that’s what you call an office… The UMIST principal’s office was located on the ground floor of Sackville Street Building, between the council chamber and the general office – complete with ornate fireplace, large polished table and framed artwork. Students grab a meal to refuel in the Students’ Union coffee bar. Located in the since-demolished Welsh Chapel on Lime Grove, the cafeteria was part of a spectacular setting – including Gothic arches lining the old church nave. 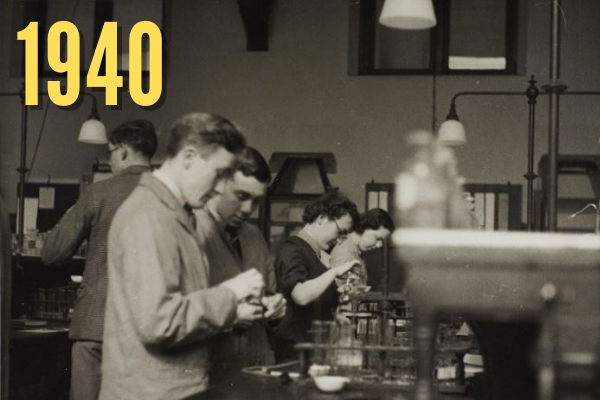 Focused chemistry students get to grips with their apparatus in the Roscoe Chemistry Laboratory. At the very top of the image you can just about make out one of the buttresses – these supported the beams for an impressive vaulted ceiling. 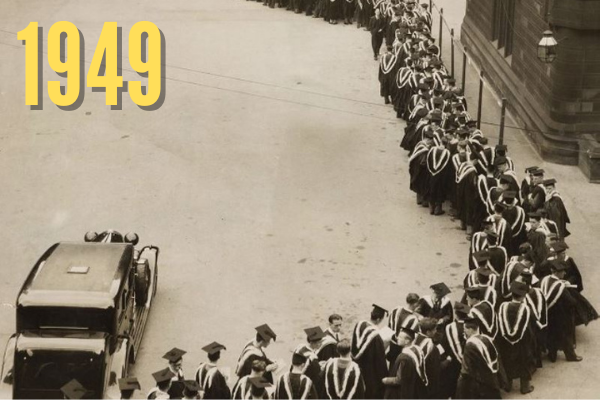 This remarkable aerial shot shows students queuing across the University’s front quadrangle, filing into Whitworth Hall to pick up their degree awards on degree day, July 1949. 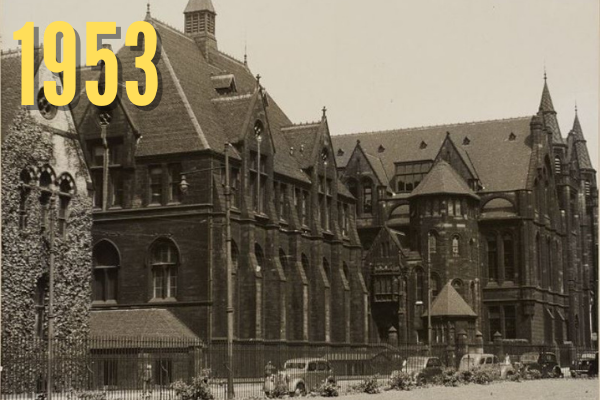 Chemistry at Manchester was once housed in the old Chemistry Building and Science Library on Burlington Street – and the old Library reading room is now home to the breathtaking Christie’s Bistro. 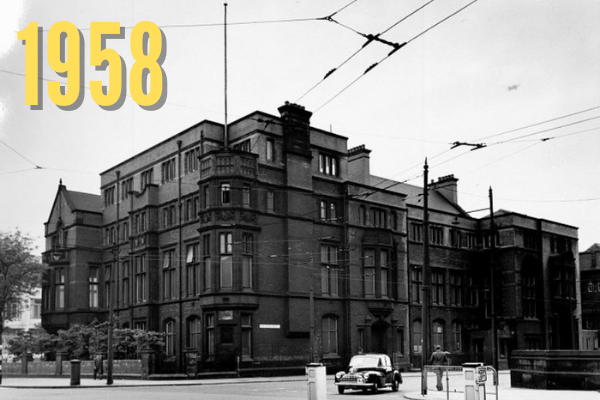 The site of the Alan Gilbert Learning Commons was once occupied by a very different building: the old Students’ Union. This building would make way for the University Refectory and Moberly Tower, before these, in turn, would make way for the ‘Ali G’. Note the electric cables suspended above the streets – these powered the Manchester trolley buses of the time.

Students in striped pyjama tops head off to collect for Rag Week – a time when students would take part in fun, often bizarre(!) activities to raise money for charity. We finish with a fantastic aerial shot of North Campus in the 70s. Look closely and you’ll spot some buildings that look the same – and others that are completely different!