We’re starting a new series of blogs where we’ll be speaking to some of the academics within the School of Chemical Engineering and Analytical Science, asking them about their research areas, as well as getting some information on their newest projects.

We’ll be bringing you a range of research from many of our leading academics, and today we’re kicking it off with Prof Adisa Azapagic, and her research into Sustainable Industrial Systems.

Hi Adisa, We’ll start with an easy question for you; Why is sustainability and particularly Life Cycle Assessment important?

Our current production and consumption patterns are unsustainable as we deplete resources and pollute the environment at an unprecedented rate. We live in a so-called ‘linear world’, following the “take, make, use, dispose” approach. We need to reverse this trend by decoupling the economic growth from resource consumption and environmental impacts. To be 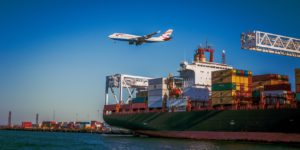 able to do that, we must first be able to understand the full life cycle of products from ‘cradle to grave’, to help us identify the hotspots that should then be targeted for improvement.

For example, we may focus on the production process when it may be in fact the way that we use products that is impacting the most on the environment. Take for example a kettle or a hoover: the majority of environmental impacts are generated while we use them rather than in their manufacturing process, because of the electricity consumption over their lifetime.

Life cycle assessment (LCA) is a tool which we can use to estimate the environment impact from cradle to grave, taking into account the extraction of fuels and raw materials, production of products, their use, and finally their disposal at the end of the useful life cycle. By carrying out LCA of different products, processes, or services, we can identify the most significant impacts and opportunities to reduce them.

What would you say is the biggest issue in the world in terms of the environmental impacts?

Well, undoubtedly it is climate change, because it’s such a global issue, affecting everybody on the planet. But, there are other environmental impacts in addition to climate change, which we also cause but they are either forgotten or yet to be discovered.

Take for example air pollution. That is still a huge problem, even in developed countries such as the UK. And yet, it is a forgotten problem because we think we’ve solved it. Just consider the recent controversy with diesel cars, for instance, where we’ve put a lot of effort to reduce greenhouse gas emission from our cars by switching from petrol to diesel cars because they are more fuel-efficient, and therefore have lower carbon emissions. However, diesel cars emit particulates and nitrogen oxide, which are polluting our air and impacting on our health. So, we have to be careful about these grand challenges for the environment that in trying to solve one – such as climate change – we are not causing another one, such as air pollution.

Are there any other issues that you would say aren’t currently being focussed on?

Another problem to worry about is waste. We are littering the planet with waste. More than 90% of the products we buy and use become waste within six months of their purchase. The latest issue we are talking a lot about is plastic waste. This is course important, but there are many, many other materials that we are wasting because of our linear approach to “stuff” (take-make-use-dispose), instead of becoming more “circular” and reusing, refurbishing and recycling products and materials.

Can you give me some examples of something you’ve done which has led to a change, and has therefore made a difference to what we do?

One example is related to reducing greenhouse gas emissions from industry which we enabled through carbon footprinting software that we developed, called CCaLC. CCaLC helps companies to estimates greenhouse gas emissions in their supply chains, considering the whole life cycle of their products from cradle to grave. They can then use the results to identify hotspots in the life cycle and to target them to reduce their greenhouse gas emissions. By working with various companies, we estimate that using CCaLC has helped to reduce around 7 Mt CO2 eq., worth around £450M in terms of the avoided damage from climate change (based on the Stern report).

We now have more than 7000 users of CCaLC across the world. Notable users include Kellogg’s, who have found through CCaLC that the carbon footprint of breakfast cereals can be reduced by up to 20%. Furthermore, the PVC sector showed that recycling PVC window frames could save 1.6 Mt of CO2 emissions per year, which is equivalent to the emissions of around 1.5 million cars.

What are you working on at the moment?

The latest work is on mapping the environmental impacts of food produced and consumed in the UK, and on determining the effects on the food-energy-water nexus. The nexus refers to the complex interactions between the food, water and energy systems, as each is needed for the other two. For example, we need energy to treat water and we use water to provide energy (e.g. steam and hydropower), while both water and energy are essential for food production and consumption. We looked at those interactions for four major types of food in the UK – meat, dairy, vegetables and fruits – produced both domestically and imported from abroad. We knew, of course, that meat has high impacts particularly on climate change, because of cows and sheep which burp methane, but we also found that some vegetables have higher impacts than meat – particularly those that are air-freighted. One example is fresh asparagus, which has a higher impact than pork and chicken because it is transported by air from outside Europe. 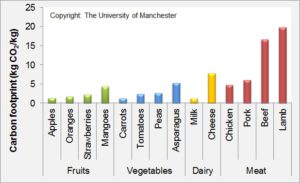 plication from that is that if you’re becoming a vegetarian or eating less meat for environmental reasons, you should only eat vegetables that are grown in the UK?

I would say that we should eat vegetables (and fruits) that are in season. Why do we need to have asparagus all year? And why do we need strawberries in December? They don’t even taste like strawberries. We either import veg and fruit, which involves impacts from transport, or we grow them in heated greenhouses in the UK, which increases the impacts because of the energy consumption. We are now so spoiled and expect everything to be available all the time.

What else can consumers do to help reduce climate change and other environmental impacts?

We can do many things and they needn’t necessarily mean big lifestyle changes. If we just focus on food for a moment, in addition to eating seasonally, we can eat less meat, particularly red meat, such as beef and lamb. We can also choose veg and fruit that have lower impacts; for example, courgettes and squash over peas and beans, and similarly, apples over strawberries or raspberries.

If we go beyond individual food items and consider meals, our work shows that it is better to prepare food at home than buy ready-made meals. This also applies to sandwiches – home-made have lower carbon footprint than those bought in a shop as they require less refrigeration and packaging. This work was highlighted by the BBC and the CBC in Canada.

We would like to thank Adisa for being the first to take part in this new series. If you have any questions you’s like to ask, please enter them in the comments and we’ll do our best to get them answered.

Keep an eye out for the next in the series, as well as our continued #MeetTheAcademics series.