A team of students from The University of Manchester, UK, has won IChemE’s Macnab-Lacey Prize for their design of a more sustainable process to produce dimethyl carbonate.

In its 9 year history, The University of Manchester have been awarded the prize 4 times and have also been highly commended. This is more than any other chemical engineering department and is an achievement of which we are very proud!

Our team behind our latest success won for their project Greenhouse Gas to Green Solvent: Sustainable Production of Dimethyl Carbonate from Carbon Dioxide. Dimethyl carbonate (DMC) has a range of uses including as a solvent and methylating agent. It is produced at industrial scale through a number of routes including transesterification. This involves reacting ethylene oxide with carbon dioxide to produce ethylene carbonate, which is followed by the transesterification of ethylene carbonate with methanol into DMC and ethylene glycol.

Our team offered an alternative design that involves three stages: synthesising urea from ammonia and carbon dioxide; then reacting the urea with ethylene glycol to produce ethylene carbonate; which in turn is reacted with methanol to produce DMC. The team designed individual unit operations to optimise the process. 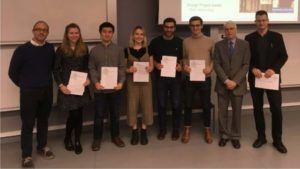 The students who made up the team from The University of Manchester were (from right to left) Elizabeth Roberts, Kristianto Gozali, Georgina Vickers, Lefteris Tsiakkis, Mattis Francois (not pictured), Kyrie Hobson and Brenda Wiputeri.

Prof. Anton Kiss (project design lead) commented: The Design Project is a major piece of work for any undergraduate in chemical engineering, which enables students to demonstrate the skills and knowledge gained elsewhere in the degree programme, alongside their own abilities to create and innovate. As such, the main learning process is activity based and associated with the undertaking of an open-ended, but time-limited project which pose significant challenges to most students.

Particularly in the UK context, the importance of the design project is recognized by its inclusion as a separate and very significant element in the accreditation of all engineering degrees. As one of its accreditation requirements, IChemE specifies the demonstration of learning outcomes in `Chemical Engineering Design Practice and Design Projects’ considering the complex and open-ended tasks that might require decisions to be made under uncertainty. The accreditation guidelines clearly underscore the importance of creative and innovative thinking in the context of chemical engineering design.

Within chemical engineering, the IChemE has rewarded excellence in student design-work through the Macnab award. Nowadays, the Macnab-Lacey Prize is awarded to a team of students whose design project shows best how chemical engineering practice can contribute to a more sustainable world. During the past decade, The University of Manchester has succeeded in winning this prestigious international award four times and has been highly commended twice. As a unit lead I am absolutely thrilled with such a great performance.

Dr Alessandro Patti supervised the winning team for 2019. He shared his experiences of being involved with the project:

It has been a pleasure to supervise the design project of these excellent students. Since the very beginning, it was clear to me that each of them had strong motivations, the right skills to deliver a detailed and precise design, and more importantly the ability to work as a team. The production of dimethyl carbonate has been a challenging project, but ideal to highlight this team’s determination, resilience, and technical abilities. I enjoyed participating to our weekly meetings, observing how good ideas were taking shape and, after careful considerations, discussions and literature search, gradually implemented in the design. The Macnab-Lacey prize awarded by IChemE was a great achievement, which especially recognised the attention given to environmental impact and sustainability. I feel especially proud of my students and of the work they have done over a very intense semester. I wish them all the best for a shining career in Chemical Engineering.

For the full information about the IChemE award, please look at the news story here.