The lightning bolt at the heart of Manchester

“With an anxiety that almost amounted to agony, I collected the instruments of life around me, that I might infuse a spark of being into the lifeless thing that lay at my feet… by the glimmer of the half-extinguished light, I saw the dull yellow eye of the creature open.”

It was with a spark of electricity on a stormy night that Dr Victor Frankenstein breathed life into his Monster.

Here at the Faculty of Science and Engineering, we’re on a Halloween countdown as we look at the science behind the spooky. And did you know there’s a place on North Campus that can generate electricity in quantities Frankenstein’s creator Mary Shelley could only dream of? Here, guest writer Callum Wood pays a visit to a research lab where sparks really do fly.

“It’s Friday 9 August, and the working day is coming to a close. Across the country, people are heading home for the weekend on trains, trams and buses.

Then, just before 5pm, the power goes out. Trains are left stranded and traffic lights fail to work. In Ipswich, a hospital’s back-up generator fails. Although normal power supply is restored around 40 minutes later, problems with trains persist over the week (although there’s nothing new about that).

Two power stations – one in the East Midlands and the other an off-shore wind farm – failed within seconds of each other, leaving one million people without electricity. Engineers now think the cause of the failure, at least partially, was a lightning strike to pylons outside London. The disruption to the grid that resulted from this is what caused the shutdown, with 5% of the electricity supply turned off to protect the rest of the network from the fluctuations.

This is where the University’s High Voltage Lab (HVL) comes in. 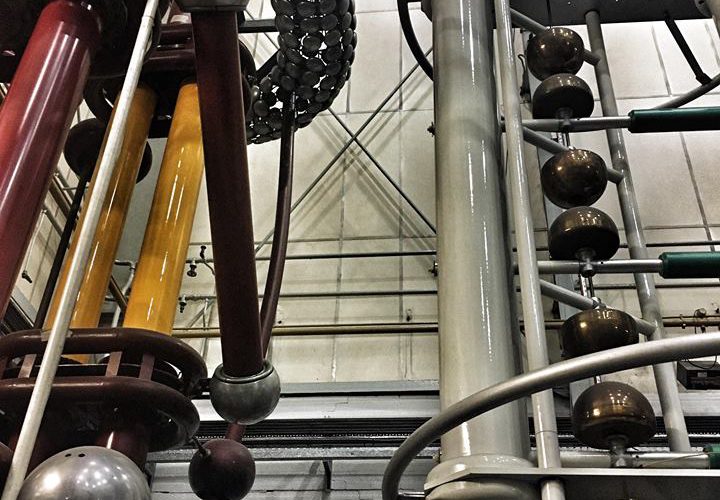 The HVL is based in the Ferranti Building, an unassuming structure nestled down a side-street of the University’s North Campus. With the grandeur of the Sackville Street Building looming over the railway arches nearby, it’s pretty easy to miss. But this quiet exterior is deceiving.

Head down to the building’s basement and you’ll find the HVL (officially the National Grid Power Systems Research Centre) – the UK’s largest university-based playground for research into electricity.

At first glance, it looks like the set of a supervillain’s lair from a 50’s B-movie. The space is dominated by a number of towering machines, each designed to test a different aspect of electrical infrastructure. From the 20ft lightning impulse generator, which lashes out with bolts measuring up to 2m volts, to the smaller, but no less impressive, alternating- and direct-current high voltage test sets, this is a place where scientists can play Zeus.

The purpose of all this? Essentially, the HVL is a facility for investigating how electrical infrastructure copes with a range of stresses and occurrences. Everything you see on the way into cities, from the material used in power pylons, to the huge transformers and equipment in substations, is (electrically) poked and prodded using the array of equipment on offer.

While it might sound like fundamental, purely research-based science, this work has a very vital and real-world purpose. As Dr Vidyadhar Peesapati (Viddy) explains: “The electrical grid is over 50 years old in places, and we don’t know how it will cope with the energy changes and uncertainties of the future.”

The HVL is where these uncertainties and challenges can be tested, to help determine which bits of the grid will hold up, and which need replacing.

A good example, says Viddy, is an unexpected disturbance on the network due to a change in energy demand and supply, or even natural events, such as the lightning responsible for the August blackout. The HVL is the place to test these changing scenarios and better understand their impact on the electrical network assets. It acts as a microcosm of the larger energy network, letting engineers and scientists test things in real time before they’re rolled out on a national level. Essentially, the HVL is where the future-proofing of the UK’s infrastructure takes place.

“The next 10-20 years is going to see a big change in how we generate and use electricity.”

Not everything takes place on such a grand scale, though. Across the hallway from the HVL is a smaller lab, which – rather appropriately – looks at things on a smaller scale. Here, researchers can study how microscopic fractures in materials form.

Although they start tiny, these hairline imperfections can grow slowly but surely, until they become a catastrophic fault. While the HVL looks at how these faults are impacted by electrical surges, the smaller lab looks at how they begin.

The lab is nearly as old as the network it tests, and its time in the Ferranti Building is coming to an end as the site struggles to keep up with the new – and more energetically demanding – pieces of equipment it houses. Come 2021, the HVL will make the move to the new MECD site on Upper Brook Street. From its new home, the HVL will hold its place at the forefront of the ongoing challenge to future-proof our electrical lives.

By zapping things with lightning, obviously.

For more of The University of Manchester’s latest news and research, subscribe to The Hub now.