Last time out with #MondayMaterials we hit the big 2-0 while speaking to Prof Bill Sampson! 20 episodes since the launch of our blog last May and it seems like only yesterday to me. I’ve learnt a lot in that time, though, particularly regarding how the research within the school works. We have several research groups and research centres within the school, working on a huge variety of topics. You only have to look back through the #MondayMaterials interviews to see that we’ve touched upon everything from graphene, to ecommerce, to paint and paper, via metallurgy, medical advances, and virtual reality. It’s an eclectic mix of research, but all of it equally fascinating and important.

For those reasons, I decided it was time to make a few changes to how the #MondayMaterials series is run. So far I’ve just been picking interviewees at random, from people I meet or those that are recommended to me, but I think you lovely readers deserve to hear from all corners of the School of Materials equally. So from here on out we’ll be switching between the research groups and centres from episode to episode, and to make room for this change we’ll now be coming your way every three weeks instead of every fortnight. But don’t worry, that extra week just means the content will even better.

Kicking off this process, and representing Biomaterials, is Dr Andrew Thomas. Although Andrew could, like many of our researchers, fit into more than just the one group, he tells us that much of his recent work has been in this area. I hope you enjoy hearing about is at much as I did:

Hi Andrew, thanks for chatting to us. Can you please explain your research, for the layman, in ten sentences or less?

I work in surface science and I look at the interaction between molecules and surfaces; so any interaction, pretty much covering every area of science, where we have a surface involved in a process – so from biomaterials to catalysts to energy materials. We try to understand the fundamental chemistry and physics of what’s happening at the surface and the interface. In the last few years I’ve worked particularly heavily in biomaterials, looking at dental implants. We’re working with a Swiss company who are interested in looking at why one of their implants performs much better than another one. We’re trying to understand how the difference in surface chemistry between the two types of implants might improve the healing rate.

And then the third strand of my research is really to do with solar energy materials, and novel solar energy materials which, rather than just having a reaction in one material, have usually got some kind of functionalising molecule attached to a surface. And it’s this functionalising molecule that actually captures the sunlight and then transfer electrons and produces an electric current.

How can your research benefit the public?

The two most obvious are the biomaterials and the solar energy sides of things.

So in biomaterials, as the population gets older particularly, you tend to find that people lose their teeth more. And the other problem is that as you get older your healing response becomes weaker. So if we can engineer surfaces through the chemistry or the physics or the structure of the surface to actually enhance the healing process, then obviously this means that the implants are more readily available to older people. So we can improve the healing. And hopefully we can also drive down the cost, if we can understand and engineer these things. At the moment it’s quite expensive to get these implants put in.

From the solar side of things then obviously there’s a big issue with greenhouse emissions, and so trying to understand how to generate electricity from novel materials is one aspect of our research. We’re also 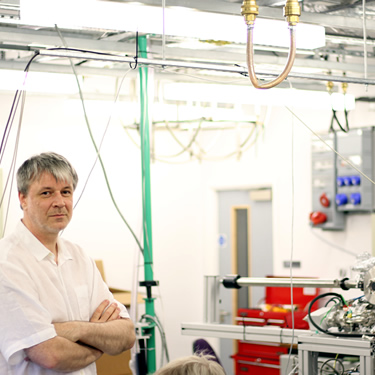 actually just about to start a project on uranium oxide. So obviously the government in the UK is quite keen to push nuclear energy, and one of the issues that people worry about with nuclear energy is the waste. We’re just writing an application now to look at how we can treat the surface of uranium oxide to make it less likely to cause problems with the environment in the long term.

Wow – sounds like you’re involved in all sorts of important work. How did you first get interested in your research area?

It was a chance meeting really. As I was coming towards the end of my undergraduate studies, I hadn’t really thought about going into research. Until we did our final-year project. When I was doing the project I was thinking ‘yeah, I’m really enjoying this’ and then I was talking to one of the lecturers in the Chemistry department here at Manchester, which was where I did my undergraduate degree, and he said that he had some potential PhD places. So I went to speak to him.

The main driving area at that time was catalysis, so surface science was all about catalysis, trying to understand how catalysts work. And I was always more interested in the physical chemistry – trying to understand how things happened rather than make new molecules which you’d be doing with organic chemistry. And I thought the project sounded really interesting. It involved travel to synchrotron radiation sources, with these big machines. That was really appealing to me, getting to go out and use international facilities.

It was a combination of the project sounding exciting and at the same time being able to learn about lots of brilliant sounding techniques, I think.

Going back a bit further, could you tell us who or what first inspired your interests in science and engineering?

Well my dad was a civil engineer, so I always had an interest in engineering.

And I just think, you know, even when I was a kid I was probably more interested in taking things to pieces to try and see how they worked. I remember getting in real trouble when I was a youngster; my brother had a new Tonka Toy for his birthday and the TV adverts at the time still told us that Tonka Toys were indestructible. So I decided to try and put this to the test and got a good hiding for my trouble! But I’ve always had that wanting to know how things work and why they are the way they are.

And then I guess as I got older – well, in my academic career I actually started as a dentist. So I studied dentistry for a year, which again kind of brings me on to why I got into biomaterials later on. So my interests in science and scientists at the time tended to be along those lines. So, Fleming – is it Alexander Fleming? Yeah. He discovered penicillin. He was one of the people I thought, yeah – he did a great thing. He found this thing out, it was partly by accident, but his contribution to society at large was pretty amazing. And obviously people like Einstein and so forth have always captured my imagination.

Moving away from work for a minute, then – can you tell us a bit about your other interests? What do you get up to in your spare time?

Okay, so most of what I do outside of work is music. I play the guitar, I used to play in bands but less so nowadays – I don’t really have the time to practice.

About three or four years ago I also took up a bit of photography. At weekends I go out cycling and taking pictures. Mainly pictures of nature, still life and stuff like that, but yeah – that’s what I do.

Brilliant, thank you. Last question, then. Could you tell us a bit about how being here in Manchester has helped your work and research?

Manchester is a great university and it’s got a lot of resources. It’s got a lot of great people here, too – really useful people to talk to. Like I say, in my area of surfaces and surface and interface analysis there’s a huge range of scientific and technological issues which we can apply the techniques we have here in Manchester to.

So, I’ve already talked about the energy side of things but recently I’ve been speaking to a colleague in Earth and Atmospheric Sciences about trying to understand how chemical reactions occur in the stratosphere. So most of the techniques we use tend to use vacuum but we’ve just got this brand new piece of kit that does near ambient pressure x-ray photon electron spectroscopy. So, x-ray photon electron spectroscopy – traditionally, you’re working at very very low pressures – a billionth of an atmosphere pressure – but this kit allows to work between one and ten millibar of pressure. We can actually take spectra under more realistic conditions if we’re talking about what’s going on on earth, but if we’re talking about stratosphere this is exactly the sort of pressures we’re looking at.

And so we can introduce gases at these pressures and we can see how they interact and react at low temperatures, and these kind of pressures, and then we can try and understand what’s happening with greenhouse gases – how they react with one another, whether we can use this to mitigate their effects in the atmosphere, and also things like effects on ozone in the ozone layer.

Well, that’s some pretty amazing stuff, Andrew! So biomaterials, but much more besides. I find it amazing that, even after 21 episodes, I’m still learning loads about how the different areas of materials interact and work together! Thanks for introducing me to surface science, yet another new and fascinating area for me!

The rest of you – thanks again for reading and watching. #MondayMaterials will be back in 3 weeks, this time with Sarah-Jane Clelland from the Henry Moseley X-ray Imaging Facility!