This is a blog article about being a PhD student in the School of Mathematics at The University of Manchester. One of our PhD students, Elliot McKernon, did a Q&A with Ulla Karhumäki – a Finnish PhD student in her third year – about research, the global mathematical community, and the impact of world politics on mathematics and mathematicians. 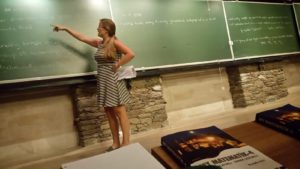 Can you give a brief description of your research?
I had quite a specific program. There exists a very big conjecture on simple infinite groups of finite Morley rank stating that they’re algebraic groups over algebraically closed fields. A very famous model theorist, Ehud Hrushovski, suggested in 1999 a new way to approach that conjecture, and in my project I follow his idea. So it’s been quite coherent.

You recently spent some time in Turkey – could you tell us what you did while you were they?

Well this is gonna be a bit long answer! Recently in Turkey some academics and students have been in a very tricky situation. I was there to help and support those students. Basically, Turkey attacked this city called Afrin, which was kind of a neutral area in the war between Syria and Turkey. After the attack some people went to the University in Istanbul called Boğaziçi to celebrate the victory of Turkey on that attack. Then some students, including some mathematicians, went outside – where there were these celebrators – to express that they were against of this kind of ideology. So, they went outside and wrote some posters saying things like “You shall not serve delight of murder and conquer.”. There was no violence of any kind, just some young students giving their peaceful opinion that they are against war. The whole event took place for around 90 minutes. Then both parties were asked to leave the university by the academics. This happened on the 19th of March 2018.

There were 32 anti-war students in the event on 19th of March. A week later, the president of Turkey announced that these anti-war students were terrorists and communists. After, many of the students were arrested by the police. Police came to their house, their house was searched, they took their devices like mobile phones and computers, and then arrested some of them – those who were arrested were sent to prison for 3 months, from where they went directly to their first trial on the 6th of June. At least two of them were also beaten during the arrest. Not everyone was put into prison, but all of the 32 students got accused for terrorism propaganda.

They had their first hearing on the 6th of June. As an outcome of the first hearing, everyone got out from the prison but everyone got banned from leaving Turkey, and the police still kept the passports of most of the students. I attended, as an observer, to the second hearing which was held on the 3rd of October.

How did you get involved?

What happened was, around the same time when these students were facing their situation, some academics were signing a peace petition. Some of them were mathematicians, and in particular they were logicians working in the model theory. I should say that I think model theory is a very strict community in an amazing way! Among other people, my supervisor got very worried about the situation of academics, our colleagues, in Turkey. He contacted the British Logic Colloquium, and they agreed that sending neutral observers to go to these trials was the kind of thing they should give money. In particular the British Logic Colloquium agreed to also spend money to send people to observe the trial of the students, so I went to observe the trial against them. 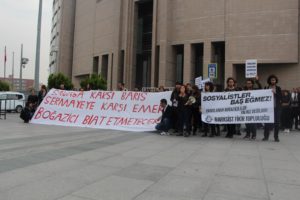 What happened while you were there? What was the outcome?

I went for five days. I Skyped with both of the logic students in advance and I spoke to them while I was there too.

The trial itself went very well considering the outcome and atmosphere. More generally, among the students there was a more relaxed atmosphere than I expected – they had been living with the situation for some time and had accepted it. But in some way this is alarming — this isn’t the kind of situation any student should be facing or thinking as a “new normal”.

In the morning, I went to the Palace of Justice, with one Turkish Professor I know, and I met the students there. As mentioned the atmosphere was surprisingly relaxed. I was asking to a friend of one of the students how come everyone seems to be more optimistic and relaxed than I thought they would be, and she answered “This is a very different situation from the last trial. Last time we hadn’t been seeing our friends (students of the case) before the trial day since they came straight from the prison. Everyone was very scared and we did not know what to expect. In the end the best possible scenario happened, that is, all the students got out from the prison. This time we get to come here with our friends (students of the case) and it seems their sentence won’t be released today, they will only get the time of the next trial. Also, we hope that the ban from leaving the country will be lifted. For that reason this time we feel more at ease and the atmosphere is much more optimistic”.

Indeed, as an outcome of the trial, everyone got their passports back and got permission to leave the country again. However, none of them got their sentences yet – the next trial date is 19th of March 2019. Since the whole thing started on 19th March, it will take at least a whole year before the last hearing. We don’t know it’ll be the last but it should be, they can’t take any more charges out and can’t make the situation worst, so it should be the last hearing.

What motivated you to get involved?
Well when I heard about the academics writing the peace petition, I knew they are looking for people who would be willing to go there. I am very pro-democracy, I think it’s insane that these kind of things can even happen – so I considered on volunteering to go and observe one of these trials. Moreover, when I heard that they also wanted people to observe the trial of the students, I thought that maybe that would suit me even better since I’m still a student myself. For me, I cannot understand that this is happening. I come from Finland, to me or most of my friends this could never ever happen. For me, it would not be possible to end up in this kind of situation, so I just feel like if I can help in any way I should do it.

Will you return to Turkey in the future?
I definitely will, but for different reasons. First of all I really like Istanbul as a city – it’s a really nice city everyone should visit. Still, perhaps I won’t visit Istanbul but Izmir. Indeed, another reason is because in Izmir they have this mathematical village, Nesin Mathematical Village, which is an amazing place. They have high school students and some bachelor students and Masters’ students. I think the village run around the year, but at least in the summers they ran different math courses, so students can go there and study – post-docs or higher ups can go there and teach, and indeed around the world many professors and other academics travel there to teach. It’s the most beautiful place up in the mountains, a peaceful place, with a library full of mathematical books, it’s an amazing place to do some research. I was there as well in summer for two weeks and I think it’s really really amazing place. 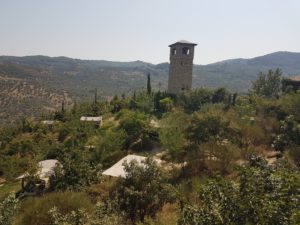 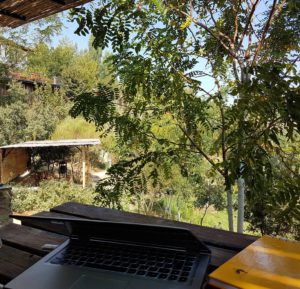