Halloween Special: Through the UMISTs of time – Sackville’s spooky past

Shortly after the turn of the 19th century, in 1824, a group of influential industrialists had a rather radical idea. They believed that all working men should have the chance to learn the basics of the sciences that were relevant to their trade.

From this idea, the Manchester Mechanics’ Institution was founded. It was backed by wealthy leaders of industry, including the father of atomic theory John Dalton, philanthropist and banker Benjamin Heywood and engineer William Fairbairn.

A few decades later, at end of the 19th century, work began on designing and building a large, modern institution where workers could learn. On the site of an old engineering works, Sackville Street Building was constructed. It opened its doors in 1902.

The building that would one day become home to the University of Manchester Institute of Science and Technology (UMIST) and, later, The University of Manchester contained state-of-the-art facilities and even an observatory. Plus, it looked more like a palace than an engineering collage; with the Grand Entrance on Sackville Street leading visitors into an ornate entrance hall with stained glass windows. 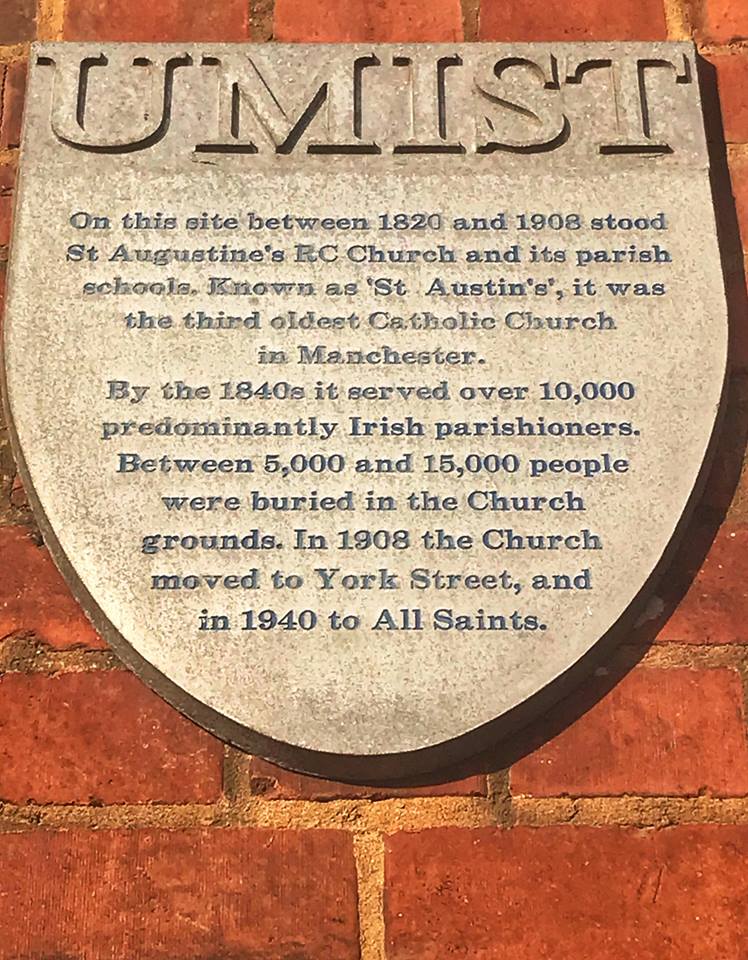 Within just a few years, the decision was made to extend. The only snag was that the site next door was St Augustine’s Church – only the third Roman Catholic Chapel in the city. It had stood on the site since 1820, and somewhere between 5,000 and 15,000 people were buried in its churchyard.

In order to extend Sackville Street Building, the church would need to be knocked down – and all the bodies moved. And so, dozens of men and boys were hired to shovel up the earth and move it in wheelbarrows. The bodies buried there were moved – and even the crypts were cleared.

Over the next 30 years, between 1927 and 1957 – with construction pausing during World War II and the Great Depression – work on Sackville Street Building continued. The result is the grand palace of science and engineering that sits at the heart of The University of Manchester’s north campus today. A plaque (pictured above) by the Granby Row entrance commemorates the former church – but what of the bodies that once lay beneath its foundations?

Unfortunately, the process of relocating the deceased was not treated quite as sensitively as it would be today. This has led some people to suggest that the restless spirits of the former churchyard’s relocated patrons wander the corridors of Sackville Street Building, longing for peace. Of course, the people who work and study here are scientists and engineers – and we need harder evidence than spooky tales and the occasional unexplained breeze to convince us we’re sharing space with folk from the ‘other side’.

But we’re not done with the spooky stories just yet – because many years before all this, the bodies lain to rest in St Augustine’s churchyard had undergone another disturbance.

In the same year that the Manchester Mechanics Institute was founded, 1824, two men spent their evenings prowling Manchester by darkness, on the hunt for a particularly ghoulish commodity. And there was one place they knew they’d find it.

At St Augustine’s cemetery on Granby Row, William Harrison and William Johnson got to work digging up a fresh grave in order to steal its occupant. The empty coffin was buried back in the ground, and the two men stole away into the night with their not-so-fresh spoils.

The Williams must have got a little too cocky in their work and become careless, as they were soon reported to the police when a neighbour spotted them eagerly packing things into large cases. Inside were the not-very neatly folded stolen corpses – ready to be shipped to buyers in London.

Both Williams did time for their crime in Lancaster Castle, while the police had the gruesome task of trying to identify the bodies. In the end, they decided to put the corpses on display to the public in order to ensure they were claimed by the correct people. All the bodies were re-interred – only to be dug up again a few years later when Sackville Street Building was under construction.

Maybe those stories of unexplained footsteps in the corridors of Sackville Street Building aren’t as ridiculous as we first thought?