The fuel of the future could come from the world’s oceans, thanks to a breakthrough made by scientists at The University of Manchester.

Researchers based at the University’s Manchester Institute of Biotechnology (MIB) have discovered that a type of bacteria that grows in seawater can be genetically engineered to alter its metabolism. Through this process, the microbe can act as a catalyst for creating new high value chemical compounds. In turn, these compounds – which could provide a renewable alternative to crude oil – form the foundation of a new biofuel for jet engines.

Unlike fossil fuels, biofuels are renewable. Rather than relying on crude oil, which is in finite supply, biofuels can be derived from plant crops such as sugar beets and corn.

However, while they are renewable, biofuels as they currently stand require intensive production. For example, large areas of land and huge quantities of water are required to grow the crops. And as the main crops are also grown for food, this creates something of a dilemma over whether food or fuel take priority when simply doubling the site of the crops is not practical.

Industrial biotechnology uses the ability of enzymes – ‘nature’s catalysts’ – to catalyse chemical reactions. These enzymes can be engineered to unlock a range of chemistries that are often difficult to carry out through standard organic synthesis.

Halomonas – the name of the type of bacteria in question – is unusual as it thrives in salt water, withstanding conditions that might kill other bacteria. It means it is not reliant on fresh water as part of the production process, which makes it better for the environment and more economical.

As Director of the MIB Professor Nigel Scrutton explains: “Effective biofuels strategies require the economic production of fuels derived from a robust microbial host on a very large scale – usually cultivated on renewable waste biomass or industrial waste streams – but also with minimal downstream processing and the avoidance of fresh water.” He continues: “With Halomonas, these requirements can be met, thereby minimizing capital and operational costs in the production of these next generation biofuels.”

“Biotechnology allows us to harness the exquisite selectivity of nature to efficiently produce complex chemicals,” says Dr Kirk Malone, Director of Commercialisation at the MIB. But while the science is evident, practically there is still a long way to go before biofuel produced via this method is widely available. The next challenge for Prof Scrutton and his team is to work on a process that will make mass production cost effective. 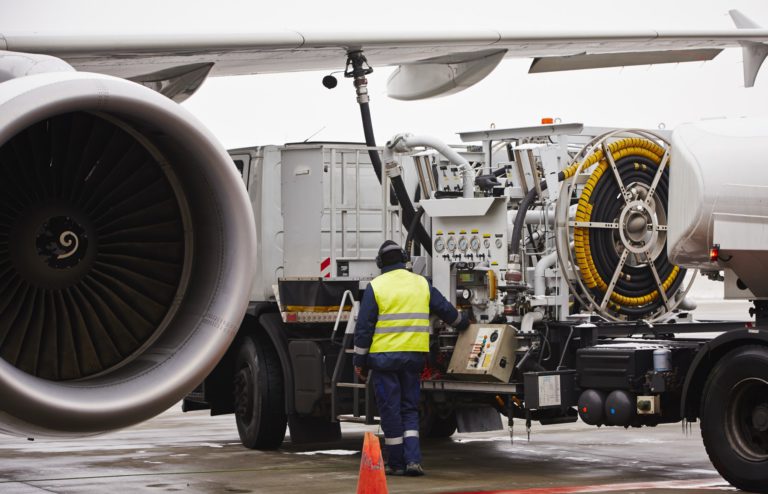 Their work is supported by US-based international maritime research agency, the Office of Naval Research Global (ONRG), where researchers are focused on converting these biological-derived precursors to relevant jet fuels.

Patrick Rose, Science Director for ONRG in London, says: “It is possible to replicate the exact same molecules we harvest from crops to make high value compounds by exploiting this biological process, by taking the genes out of the plant and inserting the information into bacteria. With this engineering feat, there is no dependence on environmental factors, and an increased level of reliability in the product.”

Researchers at the MIB are also interested in how the process might benefit other industries that rely on crude oil, such as the cosmetics, fragrance and flavouring sectors. And while the process is currently being developed to produce jet fuel, who knows – it could one day power our cars and other road vehicles.

“While the molecules we are making in this collaboration with ONRG are for jet fuel, this type of bacteria could be used as a ‘microbial chassis’ to produce other types of fuel – and other products such as plastics. Such applications are being investigated in the Future Biomanufacturing Research Hub,” says Dr Malone.

Meanwhile, C3 Biotech – a ‘fuels from waste’ company co-founded by Prof Scrutton – is working on ways to commercialise the production of bio-LPG. This is a sustainable fuel that has a direct application for cars and lorries. This may mean biofuel ends up being a realistic contender to electricity as a method to power road vehicles without damaging the environment.

Earlier this year, we spoke to Dr Eduardo Martínez-Ceseña, Academic Fellow at the School of Electrical and Electronic Engineering, and Dr Richard Fields, Research Associate at the National Graphene Institute, about the challenges still facing electric car take-up as the UK moves towards a ban on all petrol and diesel vehicles by at least 2040. You can read this article in full here.