When it comes to the nuclear power industry, you’ll always be playing the long game.

So, when you’re considering its future, you need to think long-term. And one topic occupying the minds of people in the nuclear power industry right now is the future of its power source.

Uranium, a silver-grey coloured heavy metal that is weakly radioactive in its natural state, is currently the main source of power for most nuclear fission reactors. It is uranium that’s used to fuel the chain reaction that generates the energy a nuclear power plant produces.

The Earth’s uranium resources dictate the future of the nuclear industry – and it’s an industry that people are taking a greater interest in. Compared to coal and oil power stations, nuclear plants inflict far less damage on the environment. In fact, nuclear fission releases zero CO2.

So far, so good, but the availability of uranium is finite. The more we consume, the more our resources will deplete – and the more its price will rise. 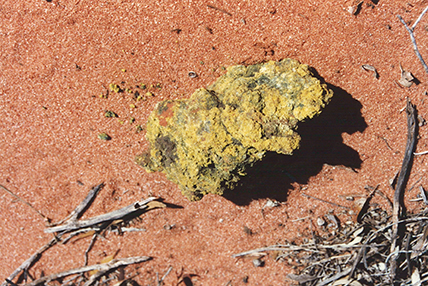 This conundrum is addressed in a new paper published in ScienceDirect entitled ‘Uranium from seawater – infinite resource or improbable aspiration?’ The authors (including researchers from the School of Earth and Environmental Sciences here at The University of Manchester) ask whether it’s time to consider a different type of nuclear power plant – one that is more economical in its use of uranium – or whether the focus should be on new ways of obtaining uranium.

Let’s take a look at the options below:

The amount of uranium stored in the ground is thought to be limited. This means that at some point we will have mined most of it and will no longer be able to rely on it (similar to the problem we face with fossil fuel). As the uranium runs out, its price will rise, and that makes running traditional light water reactor (LWR) nuclear power plants very expensive.

Fast reactors like fast breeder reactors could provide an alternative. They are able to generate far more energy from the uranium ore used as fuel than traditional LWRs – 60 times more, according to some sources.

So what’s the catch? Well, fast breeder reactors still need a lot of investment and development to make them a viable contender for LWRs. Right now, they just don’t make economic sense. However, if uranium prices reach a tipping point, that will all change.

But what if there was a way to halt the rise of uranium prices? Well there is – and it could be a permanent solution.

You see, there’s far more uranium in the world’s oceans than there is stored in the ground. It’s estimated that there are around 4 billion tonnes of uranium stored in seawater.

And that’s not all. It’s thought that 76,000 tonnes of uranium are contributed naturally to seawater every year from sources like river and glacial particulates and the erosion of coastlines. This means that, in theory, our oceans hold an almost infinite supply of uranium. If we can utilise this, rising prices no longer need to be a concern. 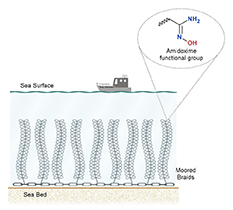 As with most things in life, there’s not just one catch with this solution, but several. To harvest uranium from the sea, it needs to be absorbed, and the most successful method we have currently is a device made from a series of polyethylene plastic braids moored to the seabed that float vertically and catch uranium using amidoxime (oximes of amide) (see image above).

The uranium absorbed by the braids can then be collected by washing with hydrochloric acid and nitric acid. To collect enough uranium to fulfil the world’s current demands, the braids would need to absorb all the uranium present in 21,212 km3 of seawater every year – roughly equivalent to the volume of all the North American Great Lakes put together.

But there’re several complications to consider before this system can be rolled out on a larger scale. For example:

What does it all mean?

We’re glad you asked. Right now, the top priority is to continue the development of seawater uranium harvesting in order to bring the price down so that it can realistically sustain the nuclear power sector. Whatever this price is, it will help decide whether it’s worth continuing to prioritise LWRs, or whether it’s time to focus on alternative options like fast breeder reactors.

So, we may be clearer on what needs to be done, but we’re no closer to a solution. But as we said, when it comes to anything nuclear, you have to get used to thinking long-term.

For example, spare a thought for the architects and engineers charged with planning large geological nuclear waste repositories buried deep beneath the ground. They have to consider how they will warn people living thousands of years in the future to stay away from the sites. The Pyramids are around 5,000 years old and it takes an expert to decipher that civilisation’s hieroglyphics. With nuclear waste sealed in these tombs for 100,000 years, how can we ensure the people alive then stay away? Having said that, there’s no guarantee humans will still inhabit the Earth then.

Back to the here and now, and one factor that may bring down the cost of seawater uranium is desalination.

Now, if you follow the news coming out of The University of Manchester, this is a term with which you’ll already be familiar. Back in April, new research from the University revealed that graphene could be used to make a sieve that can filter salt from seawater and make it drinkable. While further research and development is needed, this breakthrough has the potential to help end drinking water shortages.

And there’s something else desalination could help with too – uranium collection. Seawater desalination – whether through graphene membrane or another means – creates uranium as a by-product. It’s not a huge amount, but it could help to bring down the cost of marine uranium.

It may be a while before a solution is reached, but we know one thing for sure – there’s plenty more uranium in the sea.