To celebrate this year’s International Women’s Day on 8 March 2021, we are sharing inspirational stories from staff and students across the Faculty of Science and Engineering, showing what they #ChooseToChallenge in their roles at the University. 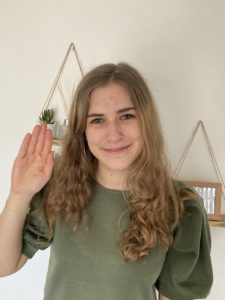 Clea Dronne is a physics student in her second year of an undergraduate degree. As she enters the second semester, she notices something new (and it’s not the online learning): “I am finally doing a course being taught by a woman! The first one. That says a lot, I think.”

The “leaky pipeline”, as Clea calls it, is a well-known phenomenon in science, technology, engineering, and maths (STEM) subjects. The further up the educational and career chain you go, the fewer women you find. Many reasons are cited for this happening, some of which Clea notes as influencing factors for her.

When she joined the University, she instantly noticed the lack of women around her: “I remember being very shocked the first time I looked around me in a lecture theatre. I think only about 25% were girls.” In fact, data from the institute of Physics for 2017/18 showed that just 24% of new physics undergraduates were women.

Women in Engineering and Science Society

That lack of representation, and the lack of role models for women studying STEM, is something she wants to try to address in her role as chair of the Women in Science and Engineering Society (WISE). “Women lack role models – so while we can’t ask the University to employ more women, we can try to shine a light on some of the women who work at the University or in industry.”

WISE have actively met this lack of representation head-on by reaching out to industry and inviting women in to deliver virtual talks to their members, and Clea’s passionate about extending this into outreach to local schools.

“Most of the time, when you ask a kid to tell you the name of a famous scientist, they’re not going to say the name of a woman, but always the name of a man. I think that one of the ways to improve this is talking to them and giving them someone they can look up to.” So far this hasn’t been possible due to COVID, but Clea is hoping to stay on as the president of WISE and begin outreach activities next year. And what better role models to take into schools than the young women of the University just starting their scientific careers?

For Clea’s own career, she came to Manchester with a clear plan to do a PhD and go into research, but she’s since changed her mind: “the statistics are already bad at undergraduate level on how many women study it [physics], and then it gets even worse at PhD, and even worse again when you look at permanent positions in universities. There are very few stable jobs, and the idea of years of instability is not something that I want.”

To help with career choices Clea says more visibility around career prospects for physics graduates, especially women, would be helpful. But despite all this, Clea still plans to use what she’s learned in her future career: “by studying physics in the UK you are not restricting yourself. There are actually so many things you can do with it. For example, I’m really interested in working in energy just because it’s a field that’s changing so much at the moment, and I feel like there’s so much that could be done out there. But I’m also really interested in technology – I did a programming module last semester and I really enjoyed it, so I do see myself doing that.” And whatever Clea ends up doing, advancing women in STEM is going to be a key part of that: “whatever I do, it is a cause that is very close to my heart and I will always be doing work on that.”

And what about the reaction she gets from people when she says she’s a physics student? Does she think being a woman makes a difference there? Clea says she doesn’t think so: “from what I’ve seen, people kind of react the same way. Whether you’re a boy or a girl, most people are simply horrified that you study physics because they hated it in school!”

Discover the other women from the Faculty of Science and Engineering who are taking part in our International Women’s Day Choose to Challenge campaign.

Find out how others throughout the Faculty of Science and Engineering are ‘choosing to challenge’ this International Women’s Day.