Hello all. Thanks for joining us on the blog. Today we’re catching up again with the Head of School Chris Hardacre, probing him with questions about his one of his latest projects – The Catalysis Hub

Welcome Chris. Could we start by having you explain what the Catalysis Hub is?

The catalysis Hub is a UK wide research centre involving over 40 universities and over 200 academics, undertaking joint research in all areas of catalysis; stretching from fundamentals, to applications and engineering solutions. In addition, the interaction with industry is of real importance.

We were initially funded by the EPSRC in 2013, and we have been awarded with a second tranche of funding to take us through the next 5 years. 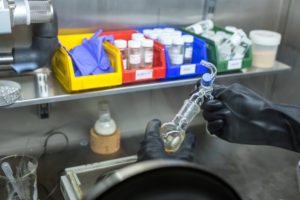 You mentioned the original funding was awarded in 2013. Could you tell us about this funding, and the work you’ve already undertaken?

To do so, all of the research that has been undertaken in the catalysis hub is joint between universities with one researcher having input from multiple PIs. All the research is collaborative and a lot of research has been done with 200+ publications resulting from the work as well as follow on grants and industry interest.

What will be different now the Catalysis Hub has been awarded £16.8m?

The new funding will build on the activities we undertook over the first 5 years, however, the specific research activities are quite different. One of which is looking at how energy and water are interlinked, and how catalysis can make the use of water and energy more efficient. Another is looking at the ‘circular economy’ , with an idea of ‘keeping the molecules in play’, so looking at recycling  waste plastics for example. 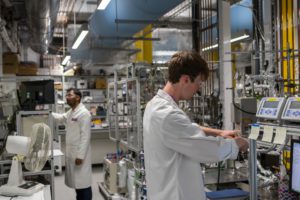 There is a catalyst design aspect as well, where we are building on our expertise in developing experimental and theoretical techniques. There are also core hub activities that include the development of work with the central facilities as well as facilitating our networking activities both within the UK and worldwide.

One of the key aspects of the new funding is to further develop our industrial links and industrial applications for the research we are undertaking.

What will be the impact of the Hub, and how will we know if the Catalysis Hub is successful once this has finished?

We are hoping that the Hub won’t finish and that is in an ongoing activity. I think that success will be that we are self-sustaining going forwards as this will indicate that our research has had impact. The vast majority of the funding to date has been from the Engineering and Physical Sciences Research Council (EPSRC), with some funding being given by Universities, and some funding from industry. Moving forward we need to have our catalysis research having more impact, developing more applications from the research and having more of a mixed funding model for the research councils and industry.

So it seems the Catalysis H 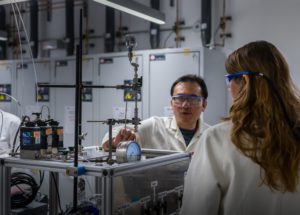 ub has made a real impact. Could you provide us with an example of a piece of real world impact this has had to date?

In terms of some of the impact the Catalysis Hub has had to date, one has been the autonomous repair of aeroplane wings and car parts that have received percussive damage e.g. a hammer strike. The Catalysis Hub has developed new technology to repair this damage without external intervention, as the majority of this damage will be below the surface and not visible. The catalysis allows this damage to be self-repaired, making it a safer way to travel.

One of the key things about the Catalysis Hub is to develop early career researchers, and one of the things we’re very proud of is the fact that, within the first stage of the Catalysis Hub, many of our Post-docs have secured either academic or industrial positions. This has demonstrated that the concept of the research model which we have promoted has allowed us to effectively develop, and nurture new talent. The Hub is all about joint research. This is all about sharing expertise and developing multi-disciplinary and inter-disciplinary activities for the good of society and the environment.

Thank you for your time Chris, and thank you all for reading. I’m sure we’ll re-visit Chris and the Catalysis Hub at a later date for an update on its progress.